Members of the cast of ‘Downton Abbey’ lend their voices to ‘Let the Nightingale Sing,’ a special episode of Disney Junior’s hit show ‘Doc McStuffins.’ 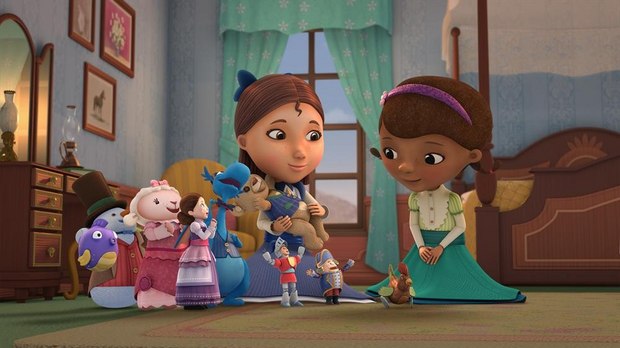 In addition to Froggatt as the famed "Lady with the Lamp," Nicol guest stars as Pip, a small porcelain doll; Milne as Bernard, a teddy bear; Harman as Doodle Doo, a tin rooster; and Bathurst as Admiral Fiddlesticks, a toy admiral. The episode features a new original song "Love What You Do" about following one's dreams.

Also debuting on November 2 is a series of shorts starring Doc McStuffins that encourages kids and families to try new foods, fun moves and simple ways to be their best. Titled So Much You Can Do To Take Care of You, the shorts are part of Disney Magic of Healthy Living, a company-wide initiative that inspires kids and families to lead healthier lifestyles by making nutritious eating and physical activity simple and fun.

Disney Junior's acclaimed Doc McStuffins tells the story of a young girl who aspires to be a doctor like her mom and runs a clinic for her stuffed animals and toys out of her backyard playhouse. Created and executive-produced by Humanitas Prize and Emmy Award-winning Chris Nee and directed by Emmy-winning Norton Virgien, the series is a production of Dublin, Ireland's Brown Bag Films in association with Disney Channel. The Hollywood Health & Society division of the USC Annenberg Norman Lear Center serves as its health and medical consultants, advising on basic health issues that are relevant to young kids and families.