New location due to open in early 2018 will be Academy Award-winning VFX company’s sixth international facility. 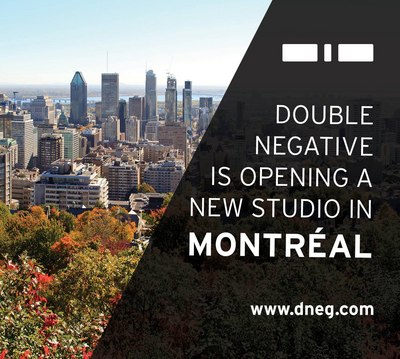 LONDON -- Leading visual effects company Double Negative will be opening a new studio in Montréal. Due to open in early 2018, this will be Double Negative’s sixth international facility, joining its network of studios in London, Vancouver, Los Angeles, Mumbai and Chennai, India. The Academy Award-winning company’s recent VFX credits include films such as Blade Runner 2049, Dunkirk, Wonder Woman and The Mummy.

The first film to be completed at the new Montréal studio will be The Kid Who Would Be King for director Joe Cornish, Twentieth Century Fox, Working Title and Big Talk. Double Negative previously collaborated with Cornish on his directorial debut Attack the Block.

“We’re very excited to be setting up our new studio in Montréal,” said Double Negative COO Ellen Walder. “There is an amazing creative and technical community in this city, and the quality of the work that is being created here is on a par with the work we are seeing coming out of London, Vancouver and LA. Our new Montréal studio will work closely with our other international locations on our biggest film projects, and will provide a cutting-edge working environment for our staff.”

Upcoming visual effects projects for the company include Thor: Ragnarok, Justice League, Pacific Rim: Uprising, X-Men: The New Mutants, Avengers: Infinity War, Deadpool 2, M:I 6 – Mission Impossible and the sequels to Fantastic Beasts and Where To Find Them and Godzilla.

“Over the past decade, Greater Montréal has become one of the world’s largest VFX and animation centres. The establishment of a flagship company like Double Negative, in addition to the many other studios already present in the region, has strengthened the position of Greater Montréal as a strategic and creative hub between Europe and the American West Coast,” said Montréal International President and CEO Hubert Bolduc.

As plans are finalized for the location and size of the facility, recruitment for the new Montréal studio has already begun, and the company has a call out for a wide range of visual effects, technical and support roles. Details of forthcoming recruitment events will be posted on Double Negative’s social media channels and website, and the company’s recruitment team will be at visual effects and animation industry event Effects MTL in Montréal on September 6-7, 2017.