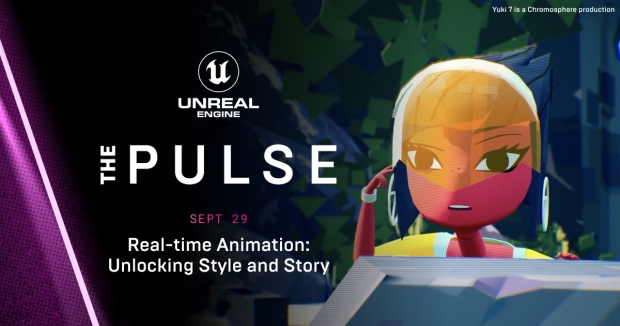 AWN is pleased to announce the latest exciting episode of Unreal Engine’s The Pulse, its thought-provoking talk series that uncovers emerging trends in interactive technology across architecture, automotive, film & TV, and games.

Panel members will discuss how real-time animation pipelines have unlocked the route to better storytelling in their own projects. By moving from linear, siloed roles to non-linear collaboration and iteration, artists can instantly see results, give feedback, and try different scenarios long before final cut. Due to the workflow’s agile nature, styles and stories that were previously impossible are now within reach. And as a bonus, a real-time workflow naturally leads to transmedia assets for multiple platforms.

Join the presentation as it explores how real-time rendering has changed the traditional animation pipeline, and what we can expect to see in the future. Be sure to stay for the live Q&A at the end.

Dan helms Animation World Network (AWN.com), one of the largest publishers of animation and VFX news and information. Dan has served on juries, delivered keynotes, and moderated panels at numerous industry events such as the Animation Masters Summit and FMX, and is currently Chair of the Computer Animation Festival for SIGGRAPH Asia 2021.

David has served as creative supervisor on award-winning projects such as Fight Club, X-Men, and Transformers, and executive producer on the animated short Mr. Spam Gets a New Hat. In his role as a technical innovator, he has created new technical solutions for previs, post, and VFX, such as collaborating on the ground-breaking all-digital color grading process on the film Oh Brother, Where Art Thou? Kevin is the founder and creative director of Chromosphere, the design and animation studio behind the Yuki 7 series and the film June, and visual direction on the Carmen Sandiego and City of Ghosts series. He previously worked as an art director and designer for projects like Steven Universe, Inside Out, Her, and The Powerpuff Girls. Karen is an Academy, Emmy, and Cannes award-winning producer, with credits that include Google Spotlight Stories and Pixar projects related to A Bug's Life, Toy Story 2, and Monsters Inc. At Epic, Karen leads the Unreal Shorts program, an initiative to get Unreal Engine into the hands of creators

For more information on The Pulse, visit The Pulse hub to see past episodes and sign up for notifications. You can also keep up to date on the latest developments on real-time animation via our Animation hub.