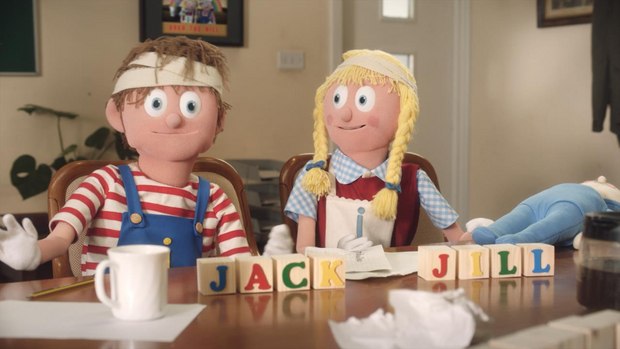 Following the success of their cult internet sensation Don’t Hug Me I’m Scared, with the current five episodes jointly amassing over 73 million YouTube views and with a growing 800 thousand subscriber fan base, Becky & Joe were approached to work their magic into the prestigious St. John Ambulance campaign.

The aim was to save lives by making baby CPR as easy as remembering a nursery rhyme. With less than 5 percent of parents knowing the simple steps to save their child it needed to be unforgettable in a crisis. Using BBH’s script as a springboard, Becky & Joe worked with longtime collaborator Baker Terry to write and score the “The Impossible Nursery Rhyme,” transforming it into something both catchy and comedic -- a hard task for such a sensitive subject.

Breathing life into familiar and well-loved characters, they brought backstories to such favorites as Humpty, an old-school star past his prime, and Incy Wincy, highly strung after his unfortunate experience with the waterspout. Utilizing their versatility and creativity, the duo designed, crafted and puppeteered all the characters along with support from Blinkink’s veteran puppet wizards Jonny & Will.

Taking advantage of connections from Blink Industries, Blink’s TV development and production company, the cream of British comedy talent was brought into voice the nursery characters, including Adam Buxton as Humpty & Tim Key as Incy Wincy.