Don’t Get Too Excited! Check Out New ‘Turning Red’ Trailer and Poster

Growing up can be a beast, especially when it makes you one! Oscar-winner Domee Shi's CG animated comedy features Pixar’s first-ever Boy Band, 4*Town, with original music by Multiple GRAMMY Winners Billie Eilish and FINNEAS – and the dorky 13-year-old girl and her crew that adore them; movie set for release on March 11, 2022. 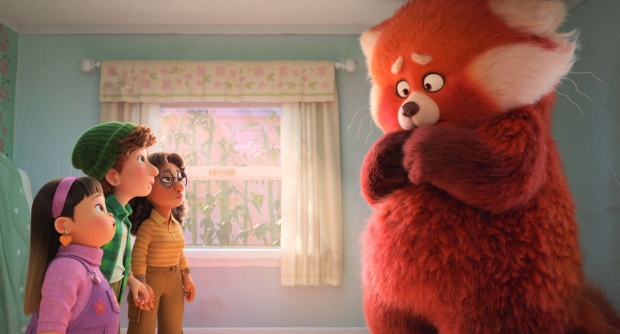 Disney and Pixar’s new 3D/CG animated film, Turning Red introduces Mei Lee (voiced by Rosalie Chiang), a confident, dorky 13-year-old torn between staying her mother’s dutiful daughter and embracing the chaos of adolescence. Her protective, if not slightly overbearing mother, Ming (voiced by Sandra Oh), is never far from her daughter—an unfortunate reality for the teenager. And if changes to her interests, relationships and body weren’t enough, whenever she gets too excited (which is practically ALWAYS), she “poofs” into a giant red panda! Directed by Academy Award winner Domee Shi (Pixar short Bao) and produced by Lindsey Collins, the comedy is set to release March 11, 2022.

Every 13-year-old girl’s coming of age story, set in the early 2000s, pretty much MUST include a boy band. Enter Pixar’s first-ever boy band, 4*Town. The heartthrobs boast 3 original songs, from GRAMMY-winning singer-songwriters Billie Eilish and FINNEAS including the song “Nobody Like U” featured in the new trailer.

“We needed our character Mei to be obsessed with something that her mom would not approve of,” noted Shi. “Boy bands were the first step into the world of boys for a lot of girls that age. The guys were all super pretty, polished, soft, and loving, and they had of way of bringing girls and their besties together. Plus, I thought it’d be really cool to create an animated boy band.”

“When we first started talking about Billie Eilish and FINNEAS—back before they’d won a billion GRAMMYS—we could see then how they had their finger on the pulse,” added Collins. “We were big fans. We met with them and pitched this crazy idea of a boy band, asking if they’d be interested in writing and producing the songs. They were!”

Eilish, whose sophomore album, Happier Than Ever, debuted at No. 1 in the Billboard 200 in the U.S. and in 19 countries worldwide, made history as the youngest artist to win in all the major categories at the 62nd GRAMMY Awards, receiving an award for best new artist, album of the year, record of the year, song of the year, and best pop vocal album. FINNEAS was the youngest ever to win the GRAMMY for producer of the year (non-classical). His debut solo album Optimist is out now.