Oscar-nominated animator shares insights into independent filmmaking, from his creative process to how he deals with the industry's changing mediums and business models. 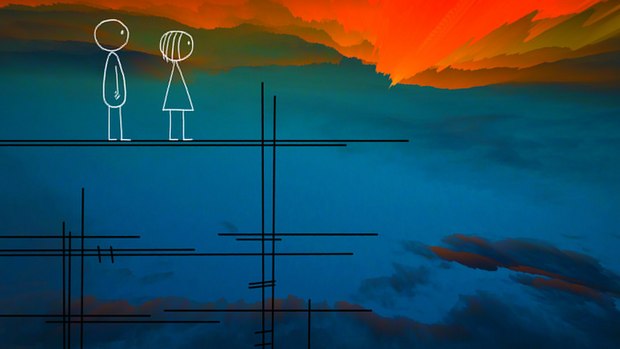 Last year, the Hertzfeldt created a couch gag for the opening credits of the Season 26 premiere of The Simpsons, “Clown in the Dumps,” a futuristic sequence featuring a fantastically stripped-down aesthetic reminiscent of the animator-filmmaker’s Academy Award-nominated short, Rejected.

This year World of Tomorrow swept away audiences at Sundance and SXSW with Hertzfeldt’s signature mix of existential humor, heart-rending humanity, and surprisingly emotive stick figures. The 17-minute short, created using Adobe Photoshop and Apple Final Cut Pro, follows a young girl, played by Hertzfeldt's own four-year-old niece, Winona, on a journey through the memories of her future self.

On a recent Reddit AMA promoting the film, Hertzfeldt described the character as “Mary Poppins but with part of [her] brain missing.” Redditors also learned that his favorite ice cream is rocky road, he recently started playing Draw Something, and his guilty pleasure is ”belting out Erasure songs when I go to the grocery store at 2 in the morning.”

But the real highlights of the AMA -- excerpted by Vice’s The Creators Project -- are Hertzfeldt's insights into independent filmmaking, from his creative process to how he deals with the industry's changing mediums and business models. Here is a selection of insightful observations the animator has collected in his two decades as an independent filmmaker:

On the creative process:

“It's like you're floating in an ocean, and you want to build a raft. So you just float there and you wait and wait. And eventually this little piece of something comes drifting by, maybe a memory, and you hang on to it, and then another little piece comes around, it is unrelated, maybe it's a funny sentence you overheard somewhere. And you keep collecting all these little things that just sort of drift by... A dream, a beautiful sentence in your head that just appeared while doing the dishes, an anecdote you stole from your old diary... And eventually you find connections between all the things and with all these parts you've gathered up you now have enough stuff to build a raft. And then once you have the raft you can remove all the bits that don't quite fit anymore, the spare parts that you didn't need after all, you toss them back or maybe save them for another raft later. when i write, there isn't a lot of active effort or swimming around, or calculation... For me that can be very poisonous to creativity. The big ideas won't happen right when you mentally stress on them... It is more a matter of being patient and being open to all the things that just drift in.”

On releasing World of Tomorrow through Vimeo on Demand:

“It's a bit of a risk, I've traditionally funded everything else through theatrical tours and DVDs, and most people will tell you there's no market for shorts online. But if we continue to believe that without ever trying to do anything to challenge it nothing will change, right?”

“On Vimeo I have the nice ability to seamlessly replace the existing stream with improved ones over time... So when you're signed up to the 30-day rental, I can be upping the picture quality with better-compressed uploads along the way, which is great. Or I can replace it all with artsy footage of relaxing underwater reefs. Cool.”

“As a side effect, in a weird way I've actually kind of grown to like the limitation of the 30-day viewing period. Think of it like a 30-day cinema ticket. It's long enough to rewatch a film and get more out of it, but it's short enough that you still know your time will eventually end and the film will be gone. It's nice and transient. It's kind of poetic. Why do we need to “own” everything? What if after the end of the 30 days I deleted all of the master files and removed it from theaters and the film will forever only exist in our memories? Isn't that kind of beautiful? Ok I won't do that.”

On how to sell short independent films:

“For the survival of young short filmmakers and aspiring animators today, we really need to begin training people to pay for short films. Theatrical tours and DVD sales and the old models that I relied on are not going to be realistic much longer for them (or even for me). I know everyone is used to the free YouTube model but without a viable market for shorts online, it is really going to continue to hurt them. Right now these artists are basically being taught that their work has no value. For a young animator, their short film is seen as a silly ‘personal project’ that should be dumped online for free... And if they're lucky it will attract an advertising gig to pay the bills. And maybe make one more ‘personal project’ that they can do on the side again. It's not a good cycle.

“I was on the sundance jury a couple of years ago and saw amazing short film after amazing short film. And many, if not most of them, are still not available online. These are wonderful films that are disappearing after a few festival screenings because many filmmakers aren't even bothering with the internet... ‘Getting exposure’ doesn't fund films. When you pay to see a movie you are casting a vote. You are saying, hey please go make more of this sort of thing. It's strange to see people bemoan current releases in theaters but then see them go line up for them on opening weekend anyway. They seem to forget they have a choice. hollywood wants to make lots of money, they are not very complicated. If they can keep making lots of money from us by continually selling us junk, they have no motive to sell us anything else. There's even more at stake in the independent world. When you pay to see an independent movie, you are casting a vote that says, hey i'd like you to actually have the chance to go make another one.”

Head over to The Creators Project for the full story.