Oscar-nominated filmmaker and animator jumps far into the future in a nod to the show's incredible longevity. 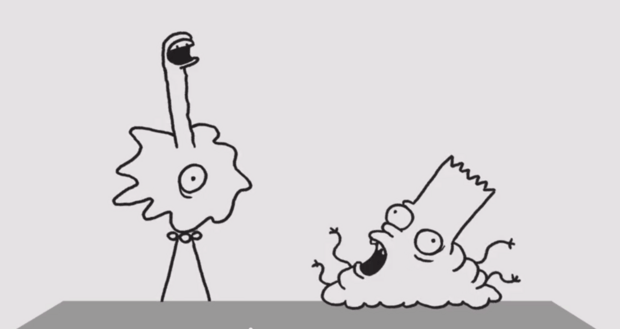 For the much-hyped Season 26 premiere of The Simpsons, “Clown in the Dumps,” executive producers for the long-running series promised the death of a character voiced by an Emmy Award-winning actor. And while the death of (SPOILER ALERT!) Krusty the Clown’s father, Rabbi Hyman Krustofski, voiced by Jackie Mason, wasn’t that big of a surprise, the episode’s opening credits were a delightful treat.

Created by Oscar-nominated animator-filmmaker Don Hertzfeldt, the couch gag jumped far into the future -- “Septembar 36.4, 10,535” to be precise -- in a nod to the show's incredible longevity.

The futuristic sequence features a fantastically stripped-down aesthetic reminiscent of Hertzfeldt’s Academy Award-nominated short, Rejected. In the gag, viewers are urged to “beam epasode now into exo-skulls and vigorously touch flippers,” a command we couldn’t possibly argue with. Watch it (again!), below:

Previous couch gags for The Simpsons have included sequences from an illustrious group of directors, including Guillermo Del Toro, Bill Plympton, Sylvain Chomet and Michal Socha.