‘Doctor Who’ Villains Fly to the Small Screen in ‘Daleks!’

BBC Studios Digital will release a five-part mini-series centered on the greatest foes in ‘Doctor Who’ history this November 12 on YouTube, concluding the ‘Doctor Who: Time Lord Victorious’ multimedia crossover. 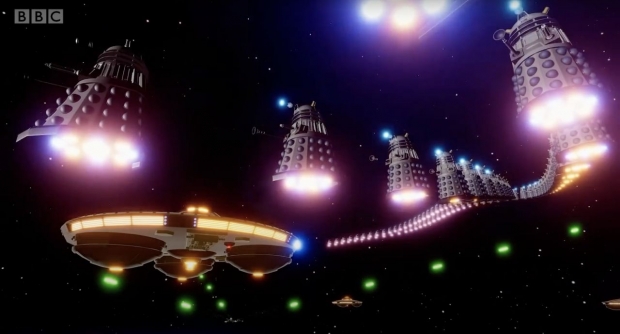 The most infamous villains in Sci-Fi history are finally getting their day in the sun…or in the illumination of whatever star illuminates their galaxy. On November 12, head over to YouTube, as the BBC is set to release Daleks!, a CGI animated mini-series comprised of five, 10-minute episodes, which will focus on the Doctor Who eponymous “exterminate-centric” foes. The series serves as the final installment of the Doctor Who: Time Lord Victorious multimedia crossover, spanning audio, novels, comics, vinyl, digital, immersive theater, escape rooms, and games.

While the Daleks have previously been considered some of the fiercest villains in the Who universe, they will meet their match during an invasion of the Archive of Islos. What force could possibly be more dangerous than little squids in robot suits? Check out the trailer for the new series:

“This latest, fantastic, thrill-packed venture into the world of animation, with the Daleks as the stars of the show, is something so many of us have been craving for years,” says Nicholas Briggs, voice of the Daleks. “And for me it's been a marvelous challenge, as usual playing every single Dalek in action, but with the added excitement of portraying some beautifully written, leading Dalek characters. It's been a blast, and I can't wait to see the finished production.”

The series is penned by James Goss, created by Studio Liddell, and produced by BBC Studios Digital. Briggs reprises his role as the voice of the Daleks in Doctor Who, alongside Joe Sugg, Anjli Mohindra, and Ayesha Antoine. Watch the first episode on the Doctor Who YouTube channel on November 12.