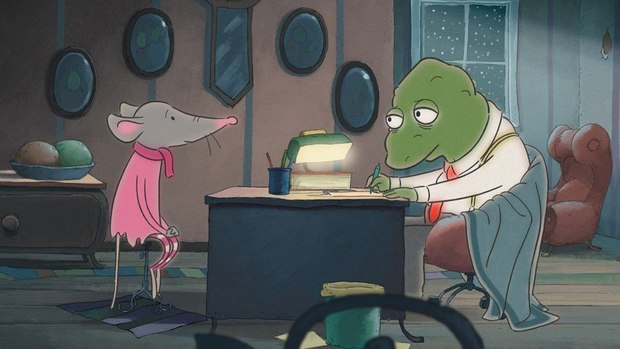 Nestled on the banks of the Göta älv river in southwest Sweden lies Trollhättan, a picturesque Scandinavian city with a growing creative industry. Alongside the “Trollywood” film production facility (a favorite of director Lars von Trier) sits Dockhus Animation -- an imaginative boutique willing to explore any medium in its quest for originality.

Another part of what makes the team especially noteworthy is their huge roster of clients and an ever-significant pile of active projects. Filmmore tackles visual effects, editorial work, and color grading, including things like retouching shots for TV episodes, matte painting, full CG shots, and plenty of 2D compositing work for movies.

Founded in 2005, the studio has used claymation, puppetry, cel animation, and CG in its quirky yet beautiful animation projects. And no two are ever the same: Dockhus channels inspiration from the likes of Gondry and Tartakovsky in projects featuring dreamlike Rube Goldberg machines or parades of stop-motion office supplies decamping from an office. Amazingly, Dockhus creates its work with little to no outside support -- they’re conceived, concepted and produced entirely within the limits of Trollhättan.

“Here in Sweden we don’t have a large animation industry, so we tend to do everything in-house,” begins Mikael Lindbom, CEO at Dockhus Animation. “We don’t outsource: when we do stop motion we make the puppets, build the sets, and carry out all the work. The same goes for our current project; the whole crew is working out of Trollhättan.”

The project referred to is Gordon and Paddy, a feature-length hand-drawn animation based on the Detective Gordon books of award-winning Swedish author Ulf Nilsson. Gordon and Paddy also happens to be Dockhus’ largest project to date, which is why the studio recently turned to ftrack.

Dockhus is yet to tap into each of ftrack’s myriad management tools, currently opting only for surface functionality as a first-time user. However, even using this basic toolset, ftrack has transformed Docus’ approach to animation right out of the box.

Before Gordon and Paddy, Dockhus relied on a combination of Google Docs and Dropbox to stay apprised of its project workflows. However, such solutions had revealed their limits by the time Gordon and Paddy started to ramp up.

Dockhus found it needed a tool that married deep organizational capacity with a simple interface that all members of the team could easily navigate and understand. Enter ftrack, which Lindbom now refers to as “the central hub for the Gordon and Paddy project.” “What we needed was a tool that collated everything in one place, instead of numerous documents and emails that can quickly spiral out of control,” explains Lindbom. “Whereas the other project management products we looked at felt daunting, ftrack was instantly accessible.”

The simplicity was key in the face of Gordon and Paddy’s heightened complexity, which stands as Dockhus’ most elaborate undertaking in its 12 years of operation. The team needed to perfectly replicate illustrator Gitte Spee’s textured pastel and crayon aesthetic, while maintaining consistency across numerous artists and a lengthy runtime.

“It was a big challenge and a lot of work,” says Lindbom. “We would give our animators entire scenes, each with a lot of takes. They needed to understand the characters and the flow from one take to the next. It’s difficult to communicate that through Docs and Dropbox alone.”

As with any large-scale creative project, Gordon and Paddy had many moving pieces, each of which needed to fit into a cohesive, unified whole. If one element failed to cohere, the creative vision Dockhus sought to conjure will start to unravel. Thankfully, ftrack’s Overview feature prevented this from happening, while additions such as Notes ensured no two artists were ever working towards separate goals.

“ftrack’s task assignment abilities were crucial in communicating consistency to artists across the studio,” says Lindbom. “We could assign a task to an individual user or a bunch of users. They would see a whole review contained in one place, which meant they knew exactly what was needed next.

“When animators upload a new clip, they would make a note and tag our director as the receiver of that note. She would receive it right away,” he continues. “Communication is at the core of creativity, so features like this, simple as they are, make all the difference.”

Lindbom also enjoyed the sense of satisfaction that ftrack introduced to the production process: “It’s a simple thing, but it’s undeniably fun to drag a task from In Progress to Done. There’s a sense of achievement to it!”

Removed from the hubbub of the world’s creative capitals, and with a slate of previous productions that favor a rustic aesthetic, Dockhus likes to keep things simple. It’s no surprise, therefore, that Lindbom voiced some concern over adopting a robust project management tool into the studio pipeline.

However, although he feared a significant technical hurdle, both Lindbom and team found ftrack fit seamlessly into the Dockhus way of working: “The simplicity of ftrack has been the most awesome thing about it -- at least for me,” he asserts. “I was the one who ended up in charge of it, and I’m not very tech-savvy!

“Looking at other project management solutions I expected the worst, because we only needed something that got the job done,” he adds. “With ftrack, I could scrape away some of the more advanced functionality and make it accessible for everyone! It was really easy to adjust ftrack -- we can dial it up and down as needed. And of course, the deeper features remain the iceberg beneath the surface, should we ever need to use them.”

Those deeper features include ftrack’s deep integrations with After Effects, Photoshop and Premiere Pro -- three tools employed by Dockhus in the delivery of its animation. Although the studio is yet to explore how this functionality can further aid its workflow, it plans to make headway in the coming months.

“We needed to start quick and simple with ftrack, and it’s proven very useful in that regard,” explains Lindbom. “However, for our next project we plan to probe more of ftrack’s potential, and that means exploring the integrations and what they offer.”

It’s on the Dockhus to-do, but in the meantime the studio will continue to accomplish what it does best -- delivering on the DIY aesthetic that’s kept the studio in business for some 12 years. Whatever’s next, however, it’s sure to do Trollhättan proud. “We’d like to work with the same team and the same setup, and absolutely work with ftrack,” affirms Lindbom. “We’re onto something here.”