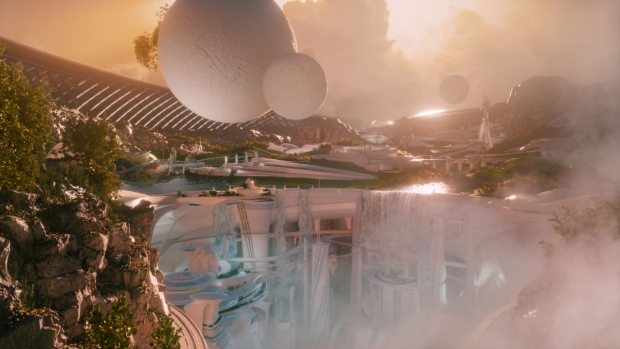 In the campaign, viewers fly through fantastical worlds where their favorite artists find inspiration to create music. Ingenuity Studios built all the environments in CG, integrated with live-action, on-set footage shot completely on greenscreen or bluescreen. They also produced previs to help to provide a sense of framing for the on-set virtual environments and better prepare for the VFX production.

Ingenuity’s initial task was to create a “fantastic hit station on which the world's greatest artists could discover new inspiration and create amazing music,” notes studio owner and VFX supervisor Grant Miller. “Everyone was keen to make the environments amazing, unique, and reflective of each artist's sensibilities."

"We shot for three days here in LA plus one remotely supervised day in Korea,” he continues. “The crew for both greenscreen shoots was relatively small, roughly 40 people total. We started on the previs soon after the job was awarded, completing a full pass on the edit as we worked with the director to refine the spot. Our focus was on the timing of large beats, general environment layout, and getting the actions of the various artists locked in."

In breaking down the spot, Miller shares, "Just after viewers are immersed in the anti-gravity chamber, they are treated to a wild transition of the chair flying out of the chamber, where they fly across the moon and zoom in on the final environment, which begins with a magical tree perched atop the moon. So, we have one environment situated within another environment.” “The transitions from one world to the next were among the more technologically challenging aspects of this campaign,” he continues. “The team wanted to drive home that all of these environments were inside the same ship, so it was a challenge to ensure transitions felt seamless. These are really big worlds. Creating the utopia and tree environments was also quite an undertaking, just due to the sheer size and asset count. We see the tree both at a macro and micro scale, which required a pretty intense amount of detailing work. The utopia set was absolutely massive but needed to be an easy read visually, making the concept and composition really crucial."

While transitioning from environment to environment was technically challenging, placing one environment inside the other proved especially complex. “For example, the largest scene that Ingenuity handled was made possible by Solaris inside Houdini, a new USD system, and by rendering with Renderman,” Miller reveals. “Prior to Houdini USD, and when faced with incredibly large scenes, the studio would have to split up pieces of the scene and reassemble them. Now, working with USD, we’re able to hold the entire scene in one file, rendering everything together for better lighting and interaction.”