Disney Unveils Riley from Pixar’s ‘Inside Out’

Promoting its Movies Anywhere service, Disney unveils a first look at Riley, the main character from Pixar’s forthcoming ‘Inside Out.’

Here’s a first look at Riley, the main character of Pixar’s Inside Out, courtesy of The Disney Blog. 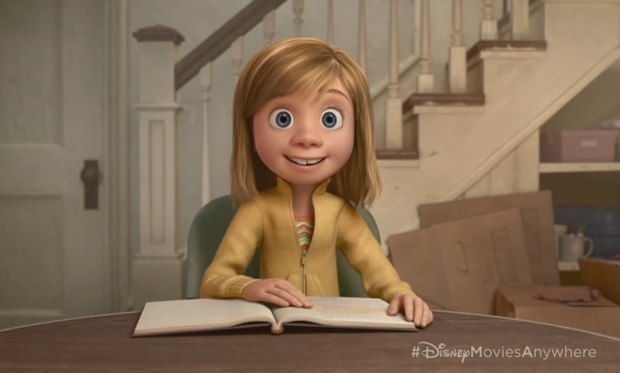 The sneak peek is part of Disney’s promotion for its Movies Anywhere service, which launched Pixar Summer Movies To Go earlier this summer. For this final week of the program, Disney is including an inside look at Inside Out, directed by Up’s Pete Docter and in theaters next year.

Inside Out is a journey inside the human mind. Here’s the movie plot synopsis:

Growing up can be a bumpy road, and it’s no exception for Riley, who is uprooted from her Midwest life when her father starts a new job in San Francisco. Like all of us, Riley is guided by her emotions -- Joy (Amy Poehler), Fear (Bill Hader), Anger (Lewis Black), Disgust (Mindy Kaling) and Sadness (Phyllis Smith). The emotions live in Headquarters, the control center inside Riley’s mind, where they help advise her through everyday life. As Riley and her emotions struggle to adjust to a new life in San Francisco, turmoil ensues in Headquarters. Although Joy, Riley’s main and most important emotion, tries to keep things positive, the emotions conflict on how best to navigate a new city, house and school.

Pixar’s Inside Out hits theaters on June 19th, 2015, accompanied by Lava, a musical short directed by Pixar head of animation James Ford Murphy.

Tags
Pixar
Disney
Inside Out
Pete Docter
Lava
James Ford Murphy
More From News:
Next Post
Meet the Characters from Laika’s ‘Boxtrolls’Previous Post
Encounters Fest Preps 20-Year Retrospective
Related Content
Pixar Reveals Plot Details of ‘Inside Out’
Pixar to Showcase 'Inside Out' at Annecy
'Inside Out' Voice Cast Revealed
Pixar’s 'Inside Out' Gets Official Announcement
Pete Docter's Next Film Officially Titled 'Inside Out'
Disney Movies Anywhere Introduces Pixar Summer Movies To Go