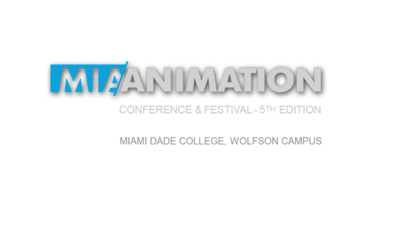 MIAMI -- Miami Dade College’s Wolfson Campus will host the 5th edition of the MIA Animation Conference & Festival, the only one of its kind on the east coast. Selected by Creative Bloq among the Top 10 best animation and 3D-focused events hosted around the globe, the conference and festival will take place October 16 & 17.

Top industry professionals from the biggest animation studios in the world will participate in this year’s festival. Frank Gladstone, Animation Director and Supervisor for Walt Disney Animation Studios, as well as Animation Supervisor for Shark Tale by DreamWorks Animation, will deliver the keynote address Saturday, October 17. Recent Emmy Award-winner Conrad Montgomery for Cartoon Network’s animated series Recess, and Mary Spio, Next Galaxy CEO and Virtual Reality content developer, will talk about the industry’s latest technologies and animation in broadcasting.

This year’s program opens Friday, October 16, with registration at 9 a.m. and workshops beginning at 11 a.m. From 10 a.m. to 1 p.m., Walt Disney Animation Studios, Sony Imageworks, and Cartoon Network will review portfolios from conference attendees at MDC’s Miami Animation and Gaming International Complex (MAGIC). The finals for the new “Game On, An Indie Game Competition” (in partnership with MDC’s Idea Center) will take place at 3 p.m. Friday. Judges include John Schappert, CEO at Shiver Entertainment, and Frank Azor, Executive Director at Alienware.

Other highlights include the “Pitch to the Industry” event, an opportunity for budding animators to pitch their best ideas at 11 a.m. Saturday, October 17, at MAGIC. The Animation Festival will take place at 6 p.m. in the Wolfson Auditorium, followed by the awards ceremony.

“The MIA Animation Conference and Festival has inspired animation and gaming enthusiasts in South Florida, and now with MAGIC, dreams can come true through these new technologies that are available to our community at Miami Dade College,” said MDC Wolfson Campus President Dr. José A. Vicente. “The Festival offers students an excellent opportunity to learn the competencies of this fascinating industry and MAGIC prepares them for exciting careers in this field.

The Festival has received more than 400 submissions from around the world, including China, United Kingdom, Thailand, France, Israel, Germany, Republic of Korea, Taiwan, and Canada. Universities and educational institutions from around the U.S. have also submitted top quality student work to the Festival.

Admission to the conference: Free for MDC students and staff; $110 for all other U.S. students; $180 for professionals.