Disney Sets Live-Action Remake of ‘Sword in the Stone’

Disney continues its recent trend of remaking its animated classics into live-action films that started with ‘Maleficent’ and ‘Cinderella’ and now includes ‘Mulan,’ ‘Winnie The Pooh,’ ‘The Jungle Book,’ ‘Beauty and the Beast,’ ‘Dumbo,’ a new movie starring ‘Peter Pan’s Tinker Bell, and the ‘Bald Mountain’ sequence in ‘Fantasia.’ 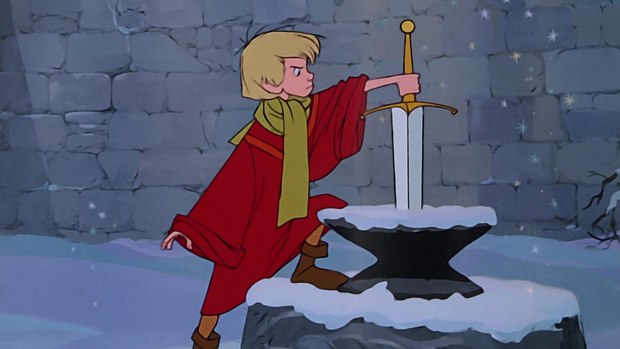 Disney is revisiting its 1963 animated fantasy The Sword in the Stone with a live-action remake, according to a report by The Hollywood Reporter.

Bryan Cogman, a writer and producer on HBO’s Game of Thrones, has been hired to write the script for the project, which will be produced by Brigham Taylor.

The Sword in the Stone, the final movie released before Walt Disney’s death, told of a young King Arthur who is being mentored by Merlin. The feature is loosely based on the T.H. White’s novel of the same name, which later became part of White’s multi-book Arthurian fantasy The Once and Future King.

Taylor is also producing the studio’s live-action version of the 1967 animated classic, The Jungle Book, which is being directed by Jon Favreau. On the heels of Sleeping Beauty-remake Maleficent and last year’s Cinderella, other live-action remakes of classic animated Disney films currently in the works include Mulan, Winnie the Pooh, Beauty and the Beast, The Tim Burton-directed Dumbo, , and the “Bald Mountain” sequence in Fantasia.

Also reportedly in development at Disney is a live-action Alice in Wonderland sequel, Alice Through the Looking Glass (arriving May 27, 2016), a Maleficent sequel, a new Peter Pan spinoff, Tink, starring Reese Witherspoon as Tinker Bell, and a live-action Prince Charming movie.

Cogman’s work on Game of Thrones has seen him nominated for WGA Awards four times and he is currently working on adapting the fantasy card game Magic: The Gathering for Fox. He also adapted YA fantasy The False Prince for Paramount.