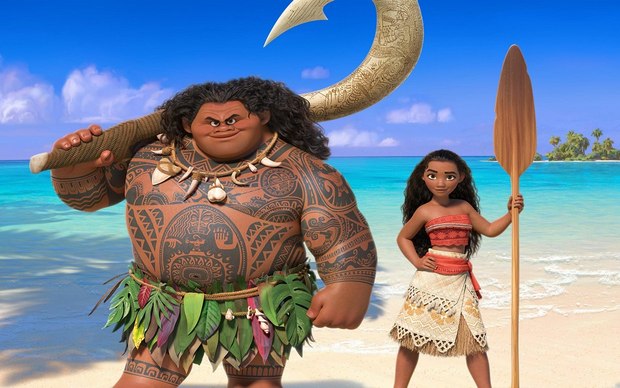 PAPE’ETE, Tahiti -- Walt Disney Animation Studios has announced that casting has begun on a Tahitian language version of the upcoming animated feature Moana. With the casting and recording process taking place over the next few months, the translation will be a first for a major motion picture. Details of the release timing are being determined. The announcement was made at a press conference in Pape’ete, Tahiti, by Moana producer Osnat Shurer and Hinano Murphy, Oceanic Story consultant and director/founder of the Te Pu Atiti’a Center, who is spearheading the local translation in partnership with Disney.

“When we first visited Tahiti five years ago as part of one of our research trips to the Pacific Islands,” said Shurer, “we met the incredible Hinano Murphy. As founder and director of the Te Pu Atiti’a Foundation, she and her husband, Frank Murphy (an expert botanist with UC Berkley, Gump Station), provided the filmmaking team with invaluable guidance on many of the cultural and biocultural elements of our film.

“Within that first trip, Hinano made a request of us -- to pursue a Tahitian language translation of the film,” Shurer continued. “And we are so very excited that we, and the talented Disney Character Voices International team, are going to create this, and create this with Hinano.”

Said Hinano Murphy, “Native languages, like Tahitian, are being lost; it is important to find new ways to excite the communities, elders, young adults and children here [in Tahiti] about our language. Hopefully, this will also inspire other Polynesian islanders to find innovative ways to teach their languages. We hope this version will be used as a teaching tool for many decades into the future.”

Moana, which is titled Vaiana: La Legende du Bout du Monde for French-speaking audiences, will release in Tahiti in French on Nov. 30, 2016. With casting just beginning on the Tahitian version, specific release information on the Tahitian language version will be announced at a later date.

Inspired by ocean sailors who masterfully navigated the vast Pacific more than 3,000 years ago, Moana is about an adventurous teenager who is inspired to leave the safety and security of her island on a daring journey to save her people. Inexplicably drawn to the ocean, Moana (voice of Auliʻi Cravalho) convinces the mighty demigod Maui (voice of Dwayne Johnson) to join her mission, and he reluctantly helps her become a wayfinder like her ancestors who sailed before her. Together, they voyage across the open ocean on an action-packed adventure, encountering enormous monsters and impossible odds, and along the way, Moana fulfills her quest and discovers the one thing she’s always sought: her own identity.

Directed by the renowned filmmaking team of Ron Clements and John Musker (The Little Mermaid, Aladdin, The Princess & the Frog), produced by Osnat Shurer (Lifted, One Man Band), and featuring music by Lin-Manuel Miranda, Mark Mancina and Opetaia Foa’i, Moana sails into U.S. theaters on November 23, 2016.