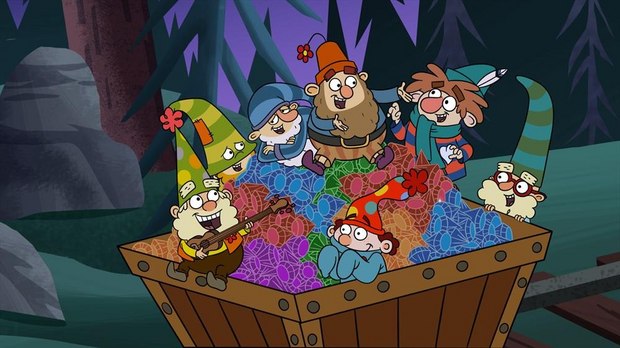 Disney's The 7D, a contemporary, comedic take on the world of the Seven Dwarfs, will premiere Monday, July 7 (10:00 a.m., ET/PT) on Disney XD and will debut on Disney Channel and Disney Junior later this year. Joining the voice cast are Jay Leno and Whoopi Goldberg in the recurring roles of Crystal Ball and Magic Mirror, respectively. The series' previously announced voice cast includes Kelly Osbourne as the comically evil villain Hildy Gloom.

This June, Disney Publishing Worldwide will release "The 7D Mine Train" app, a side-scrolling adventure that introduces users to the re-imagined Seven Dwarfs and allows them to choose one of the characters to pilot a mine cart through a variety of Jollywood locales including the 7D's mine, the Gloom's Grotto and the Queen's Treasure Room, collecting gems along the way.

Set in the contemporary storybook world of Jollywood, The 7D follows brave little heroes Happy, Bashful, Sleepy, Sneezy, Dopey, Grumpy and Doc as they work together to maintain order in the kingdom. Standing in their way are Grim and Hildy Gloom, a novice warlock and witch couple, who haplessly plot to dethrone the Queen and take over Jollywood.

In the premiere episode, "Long, Long Winter/Itsy Bitsy Spider Fighters," the 7D rescue the villagers of Jollywood from an eternal winter spell that the Glooms have cast on the kingdom and help Queen Delightful rid the castle of a pesky spider.

The series is executive produced by Emmy Award-winning Tom Ruegger (Animaniacs). Tom Warburton (Codename: Kids Next Door) serves as co-executive producer. Sherri Stoner (Pinky and the Brain) is the story editor and Alfred Gimeno (Tiny Toon Adventures), Jeff Gordon (Jakers! The Adventures of Piggley Winks) and Charles Visser (Animaniacs) are the directors. Meme master Parry Gripp ("Do You Like Waffles?") is the songwriter and composer for the series and also performs the theme song.  The series is a production of Disney Television Animation.