The four-year project between the Walt Disney Animation Research Library and the Getty Conservation Institute will focus on optimal storage conditions and re-attaching flaked and delaminated paints on Disney animation cels. 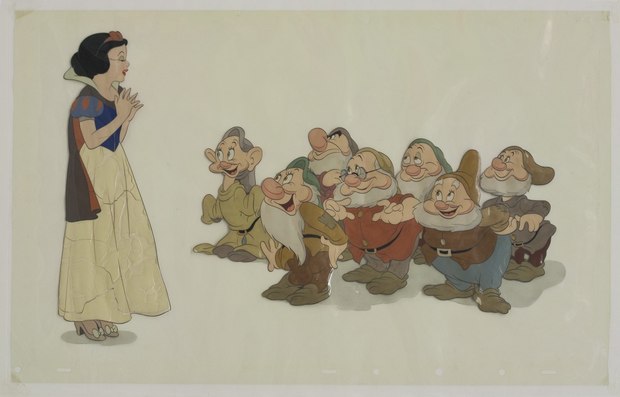 LOS ANGELES -- The Walt Disney Animation Research Library (ARL) and the Getty Conservation Institute (GCI) have announced the second phase of their ongoing collaborative research into the conservation of Disney animation cels. Over the course of a four-year project, scientists and conservators from the ARL and the GCI will investigate optimal storage conditions for cels, as well as strategies for re-attaching flaked and delaminated paints to the plastic surface. The continued research is made possible by a generous contribution from The Walt Disney Company, as well as funds provided by the GCI.

The joint effort has been at the center of the GCI’s Preservation of Plastics projects, one of the key components of its long-term Modern and Contemporary Art Research Initiative.

“The findings of this ongoing collaboration will create a path toward significantly extending the life of this hugely important collection of animation cels,” says Tim Whalen, director of the Getty Conservation Institute. “This project also offers the Walt Disney Animation Research Library a more complete understanding of their collection and simultaneously expands our knowledge of a complex material that is a challenge to conservators worldwide.”

The ARL and GCI began their collaboration 2009, when the ARL provided access to over 200,000 cels from the 1920s to 1989 in their climate-controlled facility in Glendale, CA. Researchers analyzed and differentiated three types of plastic used to produce animation cels -- cellulose nitrate, cellulose acetate, and Mylar (polyester). They also assessed the condition of sample cels, and observed yellowing, warping, cracking, shrinking, and delamination of paint, and in some cases were able to correlate the extent of deterioration with the specific composition of the cels.

To tackle these conservation concerns, scientists and conservators will determine optimum storage conditions for cels, considered the most important factor in the overall strategy for preserving the collection. While there is much research regarding the best storage conditions for plastics, the conditions need to be tested on the paints used on cels, and most importantly, on the combination of plastics and paint. This research will be aided by the ARL’s well-documented and standardized library of paint formulas that have been used for several decades. Cels will also be separated according to plastic type in order to prevent additional damage.

Another component of the project will be to explore re-attachment of paint to the cels. Various procedures will continue to be evaluated and best practices established for future conservation work.

“Not only are we determining ways to preserve these cels for future generations, but the research has broad and relevant applications to all kinds of works of art made with plastic,” says Tom Learner, Head of Science at the Getty Conservation Institute.  “These very same plastics were used by sculptors and designers working in the same period, and this in-depth study will help the field develop improved conservation strategies for all these cultural objects.”

The collaboration has been led by Michael Schilling, senior scientist at the GCI, and Kristen McCormick, Art Collections and Exhibitions Manager at the ARL. Continued work will be performed not only by outside professionals, but several in-house GCI staff. The spirit of cooperation and lending of expertise can serve as models for future partnerships in plastics conservation.

“We hope that knowledge gained by this research will inspire other collaborations that lead to advances in storage conditions and conservation treatments,” says McCormick. “Who could fault us for dreaming of a world in which characters like Snow White, beautifully rendered in animation cels, live happily ever after?”