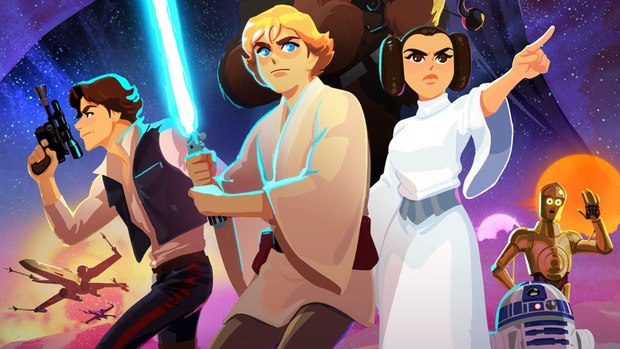 Disney has set its sights on the tiniest generation of Star Wars fans with tomorrow’s launch of a new series of kid-friendly animated short films, Star Wars Galaxy of Adventures, that will introduce classic themes, pivotal moments, and iconic characters from the venerable sci-fi adventure franchise.

The first six shorts, which debut November 30 on the all-new StarWarsKids.com and the Star Wars Kids YouTube channel, combine original dialogue, music, and sound effects with new animations and educational add-ons designed to help older fans, parents, and others introduce the Star Wars world to kids. Additional shorts are set for release in December and throughout 2019, all leading up to December 2019 theatrical release of Star Wars: Episode IX, the final film in the Skywalker saga.

James Waugh, Lucasfilm’s vice president for franchise content and strategy, told StarWars.com, “With Galaxy of Adventures, we wanted to craft something that allowed parents to help their kids take their first step into a much larger world whether they were ready to show their kids the films or wanted to find new ways to explore the content. Over the years, I’ve had so many of my friends who are parents tell me how much they wanted to introduce their kids to Star Wars but didn’t feel that their kids were quite ready for the movies yet. They wanted a way to celebrate the universe they love.”

According to Waugh, the new Galaxy of Adventures content should provide the type of Star Wars introduction many parents are looking for, timed, of course, to support the release of Episode IX. “With Episode IX coming in December and being the conclusion of the Skywalker saga — the long journey over 40 years of storytelling comes to its end — Galaxy of Adventures walks through the great moments and themes of the stories that led us here and introduces a new generation to them, in time for many to see this finale,” he noted.

With an eye towards creating and packaging simple stories and characters derived from decades of tentpole feature films in a way that appeals to little kids, the creative team behind the new series — director Barry Kelly and Titmouse Animation – were given the room to play around in the Star Wars galaxy. “It allows us to really drill into moments, to tell simple stories, unencumbered by the needs of a traditional narrative structure — it’s allowing the creators to play more, experiment more,” Waugh explained.

The new series also includes mixed-media shorts highlighting Star Wars Fun Facts, as well as guides to help parents discuss the stories with their kids after viewing the shorts together. In addition, a new line of Hasbro toys will be available on December 1, exclusively at Walmart and then nationwide in January 2019 (didn’t see that coming!)