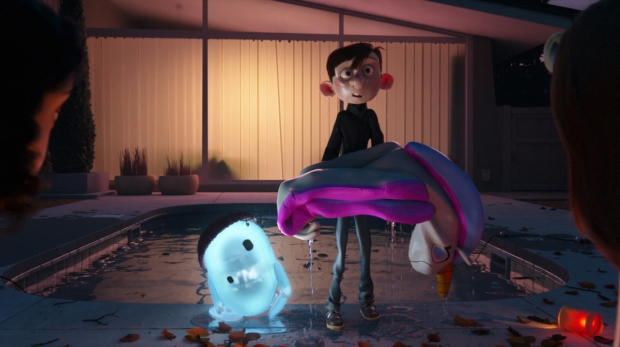 Walt Disney Studios has just released the final trailer and some new images from Ron’s Gone Wrong, its upcoming animated comedy adventure about the budding friendship between a middle-school boy and his faulty robot. The film, produced by 20th Century Studios and London-based Locksmith Animation, will have it's world premiere at the London Film Festival on Saturday 9th October, ahead of the UK release in cinemas on Friday 15th October. The film hits theaters worldwide, including the US, on October 22.

Ron’s Gone Wrong tells the story of Barney, a socially awkward middle-schooler and Ron, his new walking, talking, digitally-connected and completely faulty B*Bot device, which is supposed to be his “Best Friend out of the Box.” Ron’s hilarious malfunctions set against the backdrop of the social media age, launch them into an action-packed journey in which boy and robot come to terms with the wonderful messiness of true friendship.

Remember… crushing is not fun! And people’s heads are not to be pulled off.

The film features Liam Payne’s brand new single, “Sunshine;” written for the film, the song was released by Capitol Records on August 27 and has already racked up nearly 3M streams and 1.4M views. Payne also voices a character in the film.