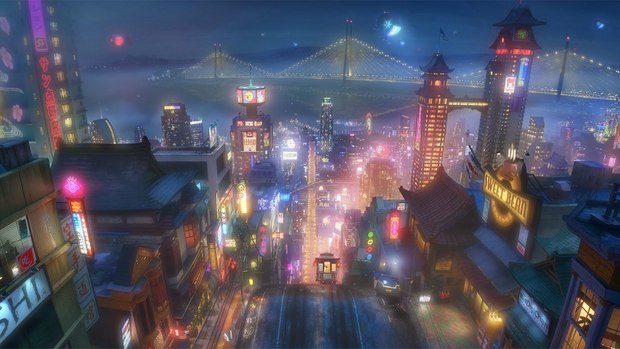 Illuminated by more than 216,000 street lights, the city of San Fransokyo has 83,000 procedural-built buildings and an equal number of street props and trees.

Walt Disney Animation Studios has released a new practical guide for its in-house production rendering software, Hyperion, posting a video guide and detailed breakdown of the rendering technology behind films such as the forthcoming Zootopia.

Introduced at the Eurographics Symposium on Rendering in 2013, Hyperion was two years in the making. An early version was first employed on the studio’s Oscar-winning short Paperman, with Big Hero 6 becoming the first WDAS feature to use the new rendering technology. Hyperion is capable of achieving a high level of realism by using physically-based ray tracing to capture and render indirect lighting effects such as refraction and glossy reflections.

As shown in the images below, even light that reflects several times (called multi-bounce light) has an impact on the scene, incorporating subtle and not-so-subtle lighting effects. Here the images show the influence of multi-bounce light on the appearance of Big Hero 6’s Baymax as he approaches the staircase. Note the soft indirect light emanating through Baymax, making him appear translucent: Here a close-up of the Big Hero 6 team lab rendered with and without Honey Lemon rolling in the explosive ball. Note the subtle influences she has on the look of the lab environment thanks to the accurate simulation of light: To optimize path tracing for complex settings, such as the fantastically detailed city of San Fransokyo, Hyperion handles several million light rays at a time by sorting and bundling them together according to their directions: Head over to www.disneyanimation.com to read the full story.