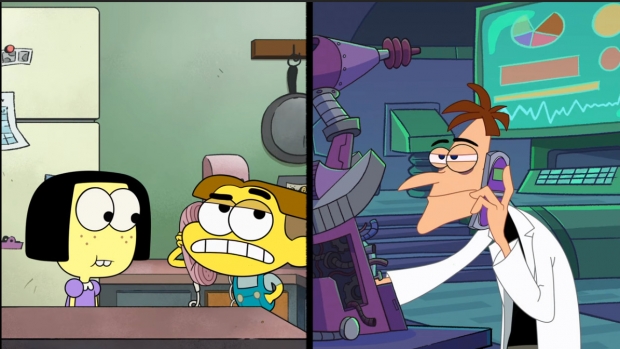 Disney Channel has just shared with AWN a new short from their animated prank call show, Random Rings. Throughout the show’s current Season 2 run, Cricket and Tilly Green from the network’s hit series, Big City Greens, continue to surprise real-world people with hilarious phone calls - and things get even “crazier” as fan-favorite Disney Channel characters start accidentally calling each other.

The show’s latest installment is a Phineas and Ferb and Big City Greens crossover; Cricket and Tilly accidently call Dr. Doofenshmirtz (voiced by Dan Povenmire) and he tries to convince them to learn evil science.

Check out a compilation of the some of the show’s highlights:

In Phineas and Ferb The Movie: Candace Against the Universe, which arrives on Disney+ this summer, stepbrothers Phineas and Ferb travel across the galaxy to rescue their sister Candace, who has been abducted by aliens and has found utopia in a far-off planet, free of pesky little brothers. Phineas and Ferb creators Dan Povenmire and Jeff “Swampy” Marsh will executive produce. Reprising their roles are Ashley Tisdale as Candace Flynn; Vincent Martella as Phineas Flynn; Caroline Rhea as their mom, Linda; Dee Bradley Baker as Perry the Platypus; Alyson Stoner as Isabella; Maulik Pancholy as Baljeet; Bobby Gaylor as Buford; Olivia Olson as Vanessa; Tyler Mann as Carl; and Povenmire and Marsh as Dr. Heinz Doofenshmirtz and Major Monogram. David Errigo Jr. joins the cast as Ferb Fletcher. Phineas and Ferb follows Phineas Flynn and his resourceful stepbrother, Ferb Fletcher, as they happily set out to conquer boredom and make every day of their 104-day summer vacation count. Throughout the escapades, they're accompanied by Perry the Platypus, their seemingly mindless family pet who, unbeknownst to all, has a double life as suave secret Agent P, deftly battling the evil Dr. Doofenshmirtz to save the world. Created and executive produced by brothers Chris and Shane Houghton (Harvey Beaks), Big City Greens is an animated comedy-adventure series which follows the offbeat adventures of 10-year-old Cricket Green, a mischievous and optimistic country boy who moves to the big city with his wildly out of place family – older sister Tilly, father Bill and Gramma Alice.