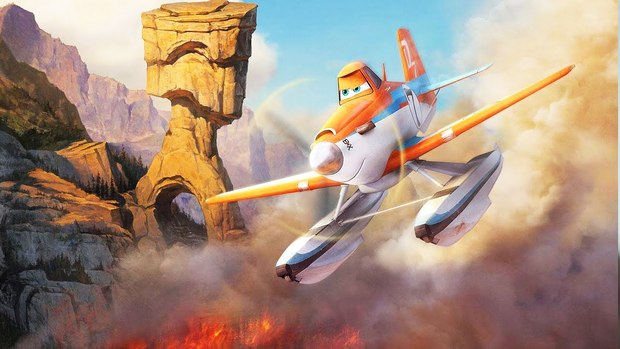 Planes: Fire & Rescue is a new comedy-adventure about second chances, featuring a dynamic crew of elite firefighting aircraft devoted to protecting historic Piston Peak National Park from raging wildfire. When world famous air racer Dusty (voice of Dane Cook) learns that his engine is damaged and he may never race again, he must shift gears and is launched into the world of aerial firefighting. Dusty joins forces with veteran fire and rescue helicopter Blade Ranger and his courageous team, including spirited super scooper Dipper (voice of Julie Bowen), heavy-lift helicopter Windlifter, ex-military transport Cabbie and a lively bunch of brave all-terrain vehicles known as The Smokejumpers. Together, the fearless team battles a massive wildfire and Dusty learns what it takes to become a true hero.

Watch the new trailer, and check out the new character art and descriptions, below: Park superintendent Cad Spinner (voice of John Michael Higgins) is a luxury Sport Utility Vehicle who’s better suited for a country club than the country. Self-centered and passionate about profits, Cad diverts a big chunk of the firefighters’ budget to his lodge restoration project. Though completely turned off by dirt, Cad’s not opposed to playing dirty to get his way. Maru (voice of Curtis Armstrong) is the mechanic tug at the Piston Peak Air Attack base. Friendly with a sarcastic sense of humor, he’s been around a long time and has the cluttered hangar to prove it. With no budget for new parts, Maru's many shelves of old parts and machinery come in quite handy. The repurposing pro’s motto? “It’s better than new!” Feisty old Mayday (voice of Hal Holbrook) has been Propwash Junction’s fire and rescue truck for … ever. He’s always rarin’ to go, but he’s lost a little speed over the years. Plus, his hoses are leaky and he can’t see much without his glasses. Propwash Junction is growing fast thanks to resident-turn-big-time-racer Dusty, so Mayday might be in over his headlights. A loyal and trustworthy tour bus at Piston Peak for 72 years, Ol’ Jammer (voice of Barry Corbin) knows every trail, stream, rock and tree. This strong and seasoned bus with a gentle soul is eager to share his vast knowledge of the park’s history with the multitude of admiring daily visitors. Pulaski (voice of Patrick Warburton) is Piston Peak’s structural engine, responsible for protecting the buildings and bridges in the park. With a 2000-gallon tank, he can pump water at 1000 gallons per minute, but protecting the renovated Grand Fusel Lodge—considered the largest log structure in the world—may prove impossible, even for Pulaski. Ryker (voice of Kevin Richardson), a 17-year veteran of the Transportation Management Safety Team (TMST), not only lives by the book when it comes to airport accident investigations, he wrote the book. Nothing slips by this air safety investigator, so don’t even try.

Disney’s Planes opened August 9, 2013, and has grossed more than $200 million worldwide, with some global markets still to open.

Tags
Disney
Planes: Fire & Rescue
More From News:
Next Post
LOGAN Expands into Film & Television with the Launch of Logan PicturesPrevious Post
Rare Disney Art to Be Sold at Auction