Elsa encounters a mythical Nokk water spirit in Disney’s upcoming sequel to the most successful animated feature in history, arriving in theatres November 22. 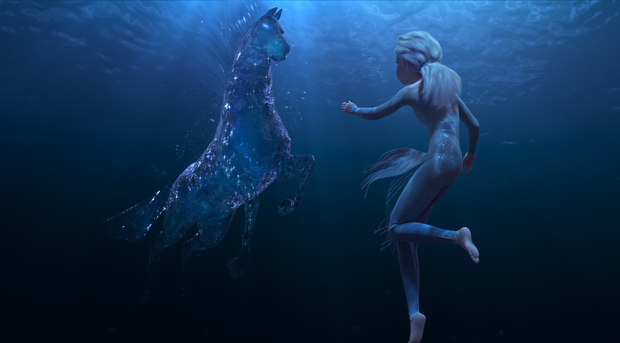 Fans get a bigger glimpse at Elsa and Anna’s difficult and dangerous journey in the new trailer for Walt Disney Animation Studios’ Frozen 2, which opens in theatres November 22. Disney has revealed a tad more of the secretive storyline.  Why was Elsa born with magical powers? The answer is calling her and threatening her kingdom. Together with Anna, Kristoff, Olaf and Sven, she'll set out on a dangerous but remarkable journey far beyond the gates of Arendelle. In Frozen, Elsa feared her powers were too much for the world. In Frozen 2, she must hope they are enough.

In the new trailer, while attempting to freeze the stormy seas that bar her escape from a barren, rocky island, Elsa encounters a Nokk—a mythical water spirit that takes the form of a horse—who uses the power of the ocean to guard the secrets of the forest.  We see Anna and Olaf’s canoe plunges over a perilously tall waterfall; we also watch Kristoff snatch Anna from being overtaken by a raging, mysteriously bright forest fire.