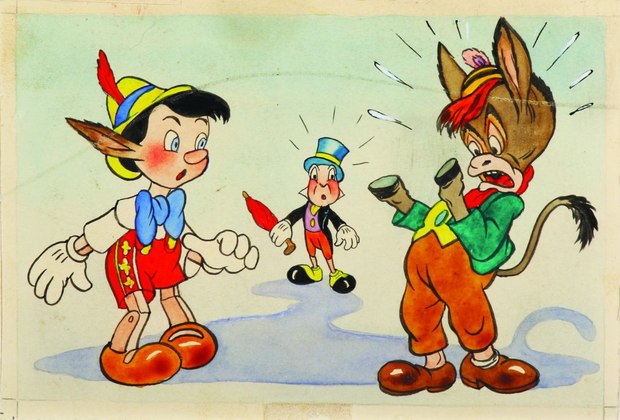 LOS ANGELES -- Hollywood memorabilia dealer Profiles in History will auction off a lot of over 120 Pinocchio paintings and various other Disney artifacts, including Walt Disney’s original hand-annotated working script for Cinderella and 50 rare Disney theme park costumes, on June 9th in Los Angeles. The 120 detailed Pinocchio paintings were created by top Disney animators in England as source artwork for a series of stickers given out with Belgian company De Beukelaer’s cookie tins. The lot includes both the artwork and all 120 collector stickers. The estimated value of the lot is $60,000­–$80,000.

The other Disney Animation item up for auction is Walt Disney’s 147-page, hand-annotated working draft of the Cinderella film, 20 pages of which contain Walt Disney’s handwritten notes. It’s estimated the script will fetch in the range of $40,000–$60,000.

Also in the auction is a Beauty and the Beast Main Street animated window display purchased at the Disneyana Convention at Walt Disney World in 2000, with moving parts that all work, and containing an iconic scene from the film. Estimated to sell for $10,000 - $20,000, only a handful of these animated displays have ever been sold.

The costumes include Haunted Mansion gothic-style costumes, as well as costumes from Disney theme park attractions “Pirates of the Caribbean,” “Hall of Presidents,” “Tomorrowland” and “Animal Kingdom.”

The most unique item included in the auction might be the handmade stove Walt Disney made in the late 1940s for a small-scale railroad in his backyard, the “Carolwood Pacific.” He crafted a miniature pot-bellied stove for the caboose as a training project to acquaint himself with the tooling equipment required. Estimated value of the stove is $2,500 –$3,500.