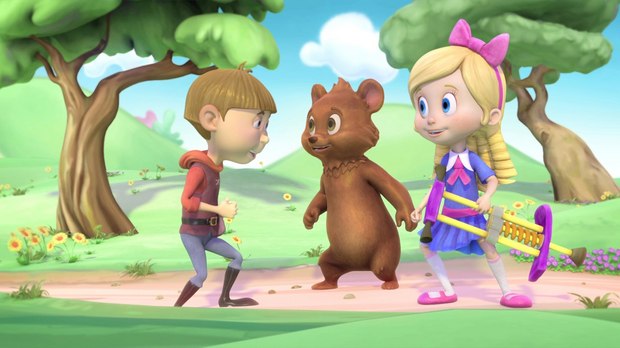 Reflecting Disney's deep roots in storytelling that resonates across generations, Goldie & Bear captures the timeless appeal of sharing stories through fairy tales, folk tales and nursery rhymes. Each episode features two 11-minute stories that showcase the new, unexpected friendship between Goldie and Bear as they seek out fun and adventure along with their friends and neighbors, all of whom are drawn from beloved storybook characters.

Beginning where the classic tales leave off, Goldie & Bear celebrates the distinct personalities of Goldie, Bear and their quirky pals, and encourages children to develop their own enchanting friendships. The series is populated with a diverse cast of storybook characters who model friendship, community, respect for individuality, resilience in the face of adversity and compassion for others, and is meant to spark conversations among kids and parents about the narratives and morals highlighted by Goldie and Bear's unlikely friendship and their comedic interactions in Fairy Tale Forest.

Maria Tatar, chair of Harvard University's program in Folklore and Mythology and series consultant, advising on storytelling, fairy tales and folklore, said, "When we are stumped, a story often provides the answer -- not in the form of a one-liner but in a conversation about the things that mattered to us in the tale."