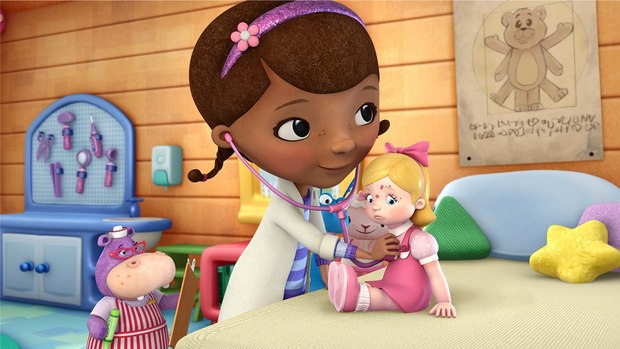 Disney Junior's Doc McStuffins has won the Peabody Award in the Children/Youth category. The prestigious award recognizes outstanding storytelling in electronic media.  The acclaimed animated series for kids age 2-7, which was recognized for its "disarming, inspiring storytelling," depicts a young girl who aspires to be a doctor like her mom and runs a clinic for stuffed animals and toys in her backyard playhouse. The 2015 Peabody Awards Ceremony will take place May 31.

Created and executive-produced by Humanitas Prize and Emmy Award-winner Chris Nee, Doc McStuffins showcases the hallmarks of great Disney storytelling – fantasy and wish fulfillment – while modeling compassion and good self-care. Each episode follows Doc and her much-loved stuffed animal friends Stuffy, Lambie, Hallie and Chilly as they diagnose and nurture a toy in need.

The series premiered in March 2012 to record ratings, and shortly thereafter, a group of female African-American physicians were inspired to begin a "movement" they coined "We Are Doc McStuffins." Seeing a reflection of themselves in Doc, the group grew to form the Artemis Medical Society, which now boasts a membership of over 4,700 women physicians of color from around the world.

Doc McStuffins was recently awarded an NAACP Image Award for Outstanding Children's Program and is currently nominated for a NAMIC (National Association for Multi-Ethnicity in Communications) and Emmy Award.

Doc McStuffins is also a prominent part of the popular "Disney Junior Live on Stage!" attraction at Disney California Adventure at the Disneyland Resort and Disney's Hollywood Studios at the Walt Disney World Resort. Beginning this May at Disney Hollywood Studios, Doc McStuffins will begin daily appearances in a setting inspired by her playhouse clinic.

Produced by Dublin, Ireland-based Brown Bag Films in association with Disney Channel, Doc McStuffins airs daily on Disney Channel and Disney Junior. The Hollywood Health & Society division of the USC Annenberg Norman Lear Center serves as the health and medical consultant for the series, advising on core health issues that are relevant to young kids and families.