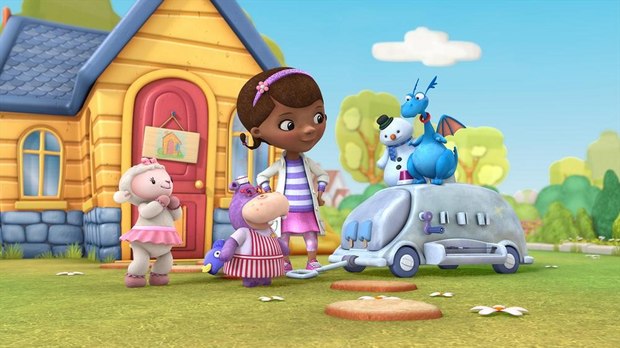 Disney Junior has ordered new seasons of its animated series Sofia the First, Doc McStuffins and Jake and the Never Land Pirates. Disney Junior is TV's #1 preschool-dedicated network in the Nielsen demographic, Kids 2-5. The record-breaking Sofia the First, which follows the adventures of Disney's first little girl princess, and the acclaimed Emmy-nominated Doc McStuffins, which centers around a six-year-old girl who runs a clinic for her stuffed animals and toys, have each been picked up for a third season, while the Emmy-nominated and Annie Award-winning Jake and the Never Land Pirates, featuring a crew of kid pirates alongside classic Disney characters Captain Hook and Mr. Smee, has received an order for a fourth season.

“Sofia the First, Doc McStuffins and Jake and the Never Land Pirates do what Disney does best — tell great stories with humor and heart,” said Nancy Kanter, Executive Vice President, Original Programming and General Manager, Disney Junior Worldwide. “We've seen these series connect with our audience around the world and across platforms in meaningful ways, and we have many more stories to tell. We look forward to developing new narratives that will put our charismatic princess Sofia, aspiring doctor Doc, and inspiring hero Jake into exciting new situations and locales.”

All three series have resonated with viewers across multiple generations, ranking among the Top 10 cable TV series for 2013 in Kids 2-5 and earning parent approval by also ranking in the top 10 preschooler cable TV series in Total Viewers and Women 18-49, in the U.S. Globally, the series can be seen in over 30 different languages in over 160 countries. They are also featured in the popular Disney Junior Appisode app for iPad, iPhone, and iPod touch and are among the most viewed episodes on WATCH Disney Junior for web and mobile devices.

Sofia the First, Doc McStuffins and Jake and the Never Land Pirates have been embraced across all Disney businesses, including Disney Parks & Resorts, which prominently features all three characters as part of the popular “Disney Junior Live on Stage!” attraction at Disney California Adventure park at the Disneyland Resort and Disney's Hollywood Studios at the Walt Disney World Resort in Florida. Disney Consumer Products has robust product lines inspired by each of the series, including award-winning toys, apparel, room décor and party supplies. Combined, the three series have over 900 book titles, including the New York Times best seller Sofia the First, which was released as an e-book and in the accompanying “Sofia the First: Story Theater” app, which has been ranked #1 Kids iPad app on the App Store in 43 countries worldwide. They are also featured in multiple soundtracks and DVD releases from Disney Studios and in Disney Junior magazine from Disney Publishing.

The series air daily on Disney Channel and Disney Junior. Sofia the First and Jake and the Never Land Pirates are produced by Disney Television Animation. Doc McStuffins is a production of two-time Academy Award-nominated Brown Bag Films in association with Disney Channel.