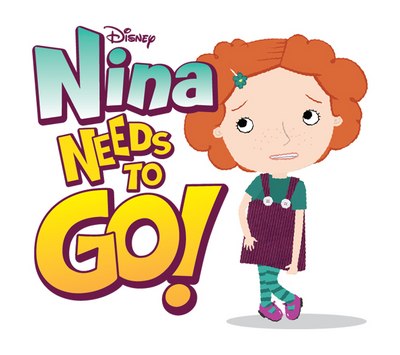 London -- Disney EMEA announced that it has greenlit a brand-new animated short-form series for preschoolers, Nina Needs To Go. Set to premiere on Disney Junior in early 2014 and air in more than 150 countries worldwide, the series follows four year old Nina who often "needs to go" at the most inopportune moments, and must use her initiative to overcome the obstacles between her and the nearest bathroom.

Produced by Bristol-based animation studio ArthurCox, Nina Needs To Go is the latest series being developed and produced by Disney’s London-based production hub. The Disney team is working with ArthurCox to deliver the 10 x two-and-a-half minute series, developed from an original idea by the founder of the studio, Sarah Cox. Lori Mozilo, Director, Short-Form Programming, Disney Junior US also contributed to the creative development of the series.

Each story takes place in a different location and follows the audacious four-year-old Nina and her loving family, parents Kate and Nat, older brother Frank, and Nana Sheila (voiced by BAFTA winner, Miriam Margolyes), a grandmother with a secret that only Nina and her brother share. Just like many preschoolers, whether on a train, at the beach or in the woods on a camping trip, Nina becomes so immersed in her imaginative play that she forgets to go to the bathroom until the very last moment.

“Nina is a character that our Disney Junior audience can relate to, and the situations Nina finds herself in are recognisable to all parents,” comments Beth Gardiner, Vice President, Production & Development, Disney Junior EMEA. “ArthurCox has taken a universal scenario and given it a funny and heart-warming twist.”

“Nina Needs To Go is based on my real experiences with my daughter,” comments Sarah Cox, Creative Director and CEO of ArthurCox. “Dramatic car journeys, missed trains and a back track through the whole of the Alhambra in Spain in search of a bathroom are real situations that have inspired each episode.  A fabulous creative team has helped us create action-packed ‘race against time’ scenarios to excite and amuse a family audience.”

“I am delighted to be part of Disney Junior’s Nina Needs To Go. The show is so beautifully animated and when I first saw the drawings I thought they really had warmth and character,” added Miriam Margolyes, who voices Nana Sheila. “Having voiced a Disney character many years ago in Mulan it feels so good to return to the Disney family, voicing Nana Shelia who is a rather fabulous ninja granny!”

The show is produced by Disney’s London-based production hub which drives the investment in, and development of, animation and live-action content outside North America, for both European and global distribution. It has already achieved great success with series such as Jungle Junction, Art Attack and Henry Hugglemonster (Disney Junior), Violetta (a co-production with Latin America for Disney Channel) and Randy Cunningham: 9th Grade Ninja (Disney XD).