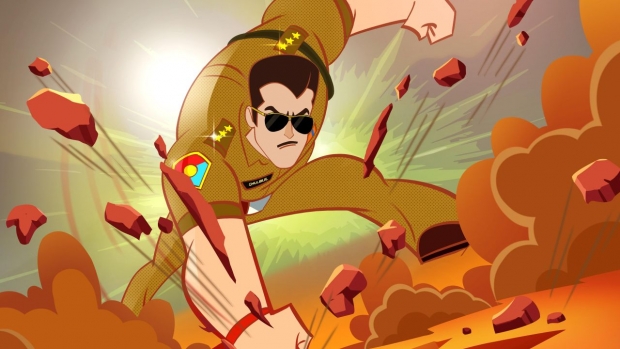 India’s largest premium streaming platform, Disney+ Hotstar, has acquired the rights to 104 episodes of Cosmos-Maya and Arbaaz Khan Productions’ new family show Dabangg, a first-of-its-kind animated series based on the popular Bollywood franchise of the same name. The first season (52x30’) will debut Summer 2021. The premium platform boasts 400 million viewers, eight million paying subscribers and features an additional library of Disney+ content making it the most prolific OTT platform in India both in terms of subscribers and content.

The series chronicles the day to day life of Police Officer Chulbul Pandey (played by Salman Khan in the films), who stands in the face of evil to keep the city safe. Fighting evil is a tough job, but whatever the situation, Chulbul always has the time to lighten up the mood with his jokes, limericks, and one-liners. He is joined by his younger brother Makkhi (played by Arbaaz Khan in the films) who, new to the police force, keeps trying to emulate his older brother.

The show will feature animated avatars of all of the franchise’s characters, including the three antagonists Chhedi Singh, Bachcha Bhaiya and Baali, Rajjo (played by Sonakshi Sinha in the films), Prajapati Ji (played by the late Vinod Khanna in the films) and the ‘BhaiyaJi Ismile’ guy.

“With Dabangg, we are venturing into untapped space in the Indian animation market in a narrative format that provides audiences with familiarity and novelty,” commented Cosmos-Maya CEO, Anish Mehta. “With this project, Cosmos-Maya will enter a new market  where we get to give our spin to brand extensions of well-loved mainstream film franchises and characters, and will pave the way for a lot more prospects of a similar nature in the future, a plan which is already in motion with projects in partnership with three major Bollywood franchises planned for 2021. We are glad to have found a long-term business partner Disney+ Hotstar which started our relationship by onboarding 234 half hour episodes of our immensely popular title Selfie With Bajrangi.”

“It is great to have Cosmos-Maya on-board to bring Chulbul into a fresh format,” noted Dabangg franchise owner and producer, Arbaaz Khan. “They understand the universe of Dabangg and we’re confident in the way they’ll get our characters to translate into a colorful format. It is a really exciting time for us, and we can’t wait to see kids give the same ‘swaagat’ to Chulbul and his posse as audiences have done over the past decade.”

Cosmos-Maya is Asia’s leading kids’ animation studio with 18 series on air globally and a 60% domestic market share in India.