New series of animated shorts from the LEGO Group to air on Disney Channel and digital platforms this fall; new story to launch with books in July along with Website and ‘Frozen’-inspired Instagram account. 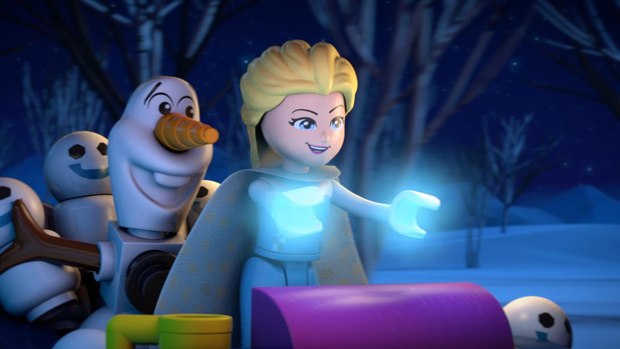 Disney today announced Frozen Northern Lights, an original story from the kingdom of Arendelle spanning a collection of books, animated shorts from the LEGO Group, and new digital extensions. Beginning in July, Frozen fans can follow Anna, Elsa, Olaf, Kristoff and Sven on an epic adventure to restore the glimmer of the Northern Lights.

The story titled “Disney Frozen Northern Lights: Journey to the Lights,” published by Random House, will be introduced as a deluxe novelization in July ahead of an extended collection of books featuring the familiar characters fans know and love, as well as a brand new protagonist named Little Rock. The storyline will be reimagined by the LEGO Group with four new animated shorts and a full compilation airing on Disney Channel this fall. The shorts will bring the unique brand of stylized animation and witty LEGO humor to the world of Frozen, with the voice talent from the movie reprising their roles.

Check out an interview, courtesy of USA Today, with Josh Gad, the voice of Olaf:

In celebration of Frozen Northern Lights, the official Frozen website will be updated with fun activities tied to the new story and Disney will launch a Frozen-inspired Instagram account @DisneyFrozen.

Walt Disney Animation Studios’ animated feature Frozen launched a worldwide phenomenon in 2013, becoming the highest-grossing animated feature ever released with more than $1.27 billion in global box office. Frozen has received multiple honors, including two Academy Awards, the Golden Globe, BAFTA Award, PGA Award, five Annie Awards and two Grammy Awards. A new live show, “Frozen – Live at the Hyperion,” opened at the Hyperion Theater at Disney California Adventure Park on May 27, 2016, and will be followed by the opening of the new Frozen attraction, “Frozen Ever After” in the Norway pavilion of Epcot on June 21, 2016. Frozen will make its television debut this holiday season on ABC and a Broadway musical inspired by Frozen is scheduled to open in New York in 2018.