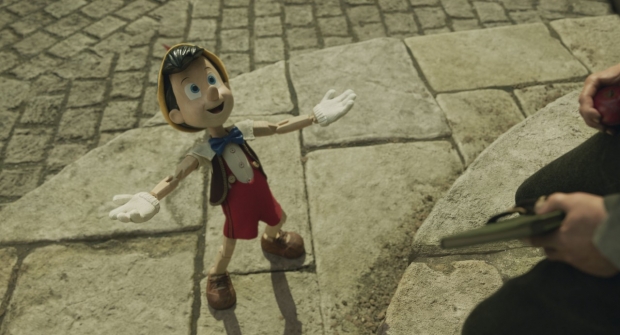 Walt Disney Studios has just released the latest trailer, key art, and stills for its upcoming live-action Pinocchio, which hits the streaming September 8, and it promises to be the visual masterpiece one expects from Disney.

Peter Hedges (What’s Eating Gilbert Grape) and Chris Weitz wrote the screenplay to this live-action adaptation of the 1940 Disney animated classic, which follows the eponymous puppet who is brought to life and dreams of being a real boy.

The beloved classic comes to life in the all-new live-action #Pinocchio! Watch the new trailer and stream the movie, a #DisneyPlusDay premiere, on September 8 on @DisneyPluspic.twitter.com/vUEeyYSmfG

The classic song from the original film, “When You Wish Upon a Star,” is performed by Erivo; the film also features new original songs composed by Academy Award nominees Alan Silvestri and Glen Ballard (The Polar Express).

Don’t confuse Zemeckis’ Pinocchio with Guillermo del Toro’s stop-motion adaptation, Pinocchio, coming to Netflix this December.   As reported in The Hollywood Reporter back in 2020, Netflix co-CEO Reed Hastings stated, “We want to beat Disney in family animation.”  It seems that Disney+’s decision to release Zemeckis film prior to its Netflix rival’s film debut might be yet another move in the two streamer’s ongoing chess game. But, come year end, when asked, “did you see Pinocchio?” you’ll having to answer, “Which one?” Not sure who gets the advantage here.

Production VFX supervisor Kevin Baillie, who previously worked with Zemeckis on The Witches and Welcome to Marwen, leads the visual effects production, which are being produced by Framestore and MPC.