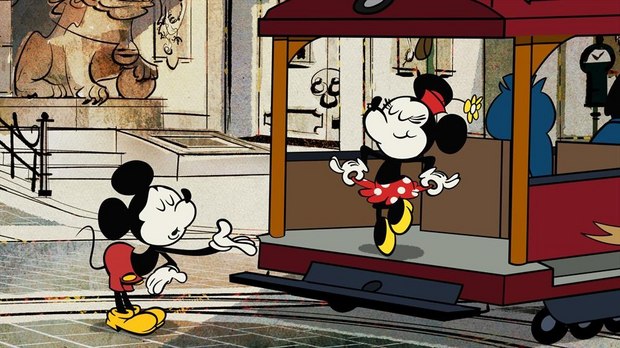 Season two of Mickey Mouse, the multiple Emmy and Annie Award-winning comedy cartoon spotlighting Disney's #1 star, debuts Friday, April 11 (9:00 p.m., ET/PT) on Disney Channel and will be available on WATCH Disney Channel, Disney.com and iTunes the day after their linear premiere. Since its debut in June 2013, the series has reached over 100 million total viewers in the U.S. and currently airs in 160 countries in 33 languages.

Season two of the comedic shorts once again features Mickey facing a variety of silly situations and heartfelt and heroic moments. The new season finds Mickey and pals -- Minnie Mouse, Donald Duck, Daisy Duck, Goofy and Pluto -- in an array of modern locales around the globe including Spain, Holland and India, as well as a trip to outer space. The season will also include several Minnie Mouse-centric shorts.

In the San Francisco-set season opener, “Cable Car Chaos,” Mickey and Minnie must stop a runaway cable car as it careens through the city's famous streets. Other new episodes include “Fire Escape,” where Mickey attempts to rescue Minnie from her burning apartment building, Friday, April 25 (7:55 p.m., ET/PT); “Eau de Minnie,” in which Minnie's new perfume enchants an entire city, Friday, May 23 (8:25 p.m., ET/PT); and “The Boiler Room,” where Mickey must face a monster living in the basement of Minnie's apartment, (June TBD).

With the slapstick feel of classic Mickey Mouse and contemporary direction and pacing, the “Mickey Mouse” cartoon shorts present Mickey in a broad range of humorous situations that showcase his pluck and rascality, along with his long-beloved charm and good heartedness. Geared towards kids age 6-14 and families and produced in 2D animation, the design esthetic reaches back to Mickey's roots and borrows reverentially from the bold style of his 1930s design, but not before adding a few contemporary touches. Designs for other characters have a similar approach, favoring a “rubber-hose” cartoon style for more exaggerated animation. Background designs closely reflect the graphic design sense of 1950s and 1960s Disney cartoons. For those true eagle-eyed Disney fans, the production team has also included the occasional homage to other icons from the storied Disney heritage.

Watch “Adorable Couple” and “Tapped Out,” from Season 1, and go behind the scenes with series director Paul Rudish, below: