Celebration continues in San Diego at Comic-Con International with a panel on the upcoming feature-length documentary on legendary Disney and Hanna Barbera animator and story artist Floyd Norman. 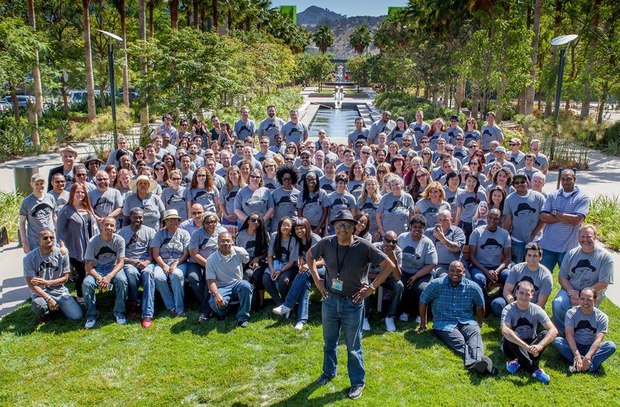 More than 150 cast members at Disney's Grand Central Creative Campus in Glendale surprised Floyd by wearing t-shirts emblazoned with a graphic of his trademark fedora and eyeglasses, with a group photo taken to commemorate the event.

Over 150 cast members surprised Norman by wearing t-shirts emblazoned with a graphic of his trademark fedora and eyeglasses, and a group photo was taken to commemorate the event. The studio commissary surprised Norman by renaming the grilled cheese sandwich (Norman's usual daily lunch) in his honor.

Later in the afternoon, over 200 family, friends and colleagues gathered to surprise and toast Norman, including composer Richard M. Sherman, Tony Anselmo, the voice of Donald Duck, Imagineer Bob Gurr, live-action TinkerBell model Margaret Kerry, and Michael Leon Wooley, the voice of Louis the Alligator from Princess and the Frog.

Highlights from the party included:

The celebration continues in San Diego at Comic-Con International on Thursday, July 9th at 9PM in Room 9 with a panel on the upcoming feature-length documentary on animation legend Floyd Norman.

Filmmakers Michael Fiore and Erik Sharkey (director of Drew: The Man Behind the Poster) will show clips from their original feature-length documentary and reunite legendary Disney and Hanna Barbera animator and story artist Floyd Norman with many animators and artists that he influenced and worked with over his 60-year career.