Deal brings Fox’s movie and TV studios, and cable and international TV businesses together under a single roof. 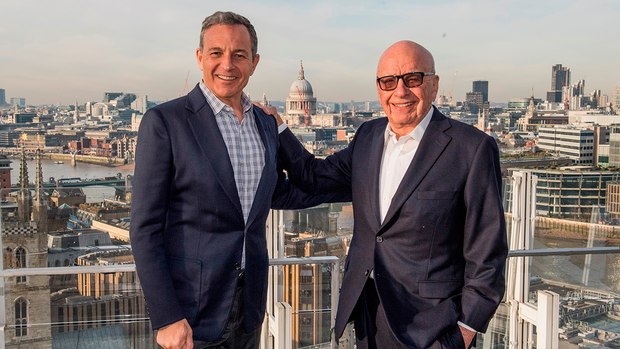 BURBANK, CALIF. & NEW YORK -- The Walt Disney Company and Twenty-First Century Fox Inc. announced Dec. 14 that they have entered into a definitive agreement for Disney to acquire 21st Century Fox, including the Twentieth Century Fox Film and Television studios, along with cable and international TV businesses, for about $52.4 billion in stock, subject to adjustment.

Immediately prior to the acquisition, 21st Century Fox will separate the Fox Broadcasting network and stations, Fox News Channel, Fox Business Network, FS1, FS2 and Big Ten Network into a newly listed company that will be spun off to its shareholders.

Combining with Disney are 21st Century Fox’s critically acclaimed film production businesses, including Twentieth Century Fox, Fox Searchlight Pictures and Fox 2000, which together offer diverse and compelling storytelling businesses and are the homes of Avatar, X-Men, Fantastic Four and Deadpool, as well as The Grand Budapest Hotel, Hidden Figures, Gone Girl, The Shape of Water and The Martian. The deal also includes the Fox-owned animation production company Blue Sky Studios.

The agreement provides Disney with the opportunity to reunite the X-Men, Fantastic Four and Deadpool with the Marvel family under one roof and create richer, more complex worlds of inter-related characters and stories that audiences have shown they love.

“We’re honored and grateful that Rupert Murdoch has entrusted us with the future of businesses he spent a lifetime building, and we’re excited about this extraordinary opportunity to significantly increase our portfolio of well-loved franchises and branded content to greatly enhance our growing direct-to-consumer offerings,” said Robert A. Iger, chairman and CEO of The Walt Disney Company.

“We are extremely proud of all that we have built at 21st Century Fox, and I firmly believe that this combination with Disney will unlock even more value for shareholders as the new Disney continues to set the pace in what is an exciting and dynamic industry,” said Rupert Murdoch, executive chairman of 21st Century Fox.

At the request of both 21st Century Fox and the Disney board of directors, Iger has agreed to continue as chairman and CEO of The Walt Disney Company through the end of calendar year 2021.

The acquisition is expected to yield at least $2 billion in cost savings from efficiencies realized through the combination of businesses, and to be accretive to earnings before the impact of purchase accounting for the second fiscal year after the close of the transaction.

The Boards of Directors of Disney and 21st Century Fox have approved the transaction, which is subject to shareholder approval by 21st Century Fox and Disney shareholders, clearance under the Hart-Scott-Rodino Antitrust Improvements Act, a number of other non-United States merger and other regulatory reviews, and other customary closing conditions.