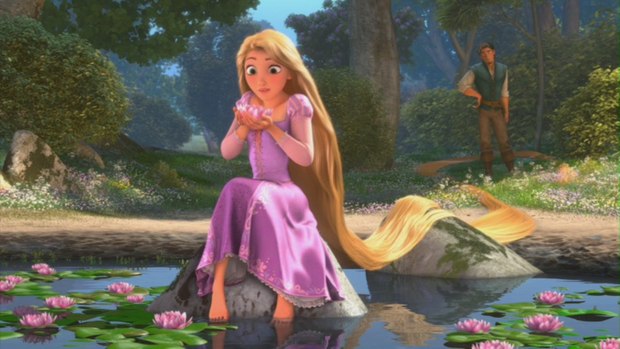 Tangled, an animated series for kids, tweens and families based on Walt Disney Animation Studios' acclaimed feature film, has begun production with Mandy Moore and Zachary Levi reprising their roles as Rapunzel and Eugene (also known as Flynn Rider). The series will premiere in 2017 on Disney Channels around the world, and will also reunite Disney Legend and Academy Award-winning composer Alan Menken and lyricist Glenn Slater.

“The genius of the original movie was its seamless blending of cinematic adventure, character-driven comedy and touching emotion,” said Gary Marsh, President and Chief Creative Officer, Disney Channels Worldwide, in making the announcement. “And we are fortunate to have several of the creative talent from that movie on board with this new production. With the addition of Chris and Shane as Executive Producers, we have the perfect team in place to create a series worthy of the original film.”

Set between the events of the feature film and the start of the 2012 short film, Tangled Ever After, the animated series unfolds as Rapunzel acquaints herself with her parents, her kingdom and the people of Corona. Her irrepressible spirit and natural curiosity about the world drives her to the realization that there is so much more she needs to learn before she can truly accept her royal destiny. She boldly puts her crown and impending marriage on hold to seek out epic adventures, much to the dismay of the King who, after missing out on Rapunzel's youth, must accept that his daughter is now an independent young woman. Accompanying Rapunzel on her journey will be Eugene; the plucky chameleon sidekick, Pascal; the no-nonsense horse, Maximus; the Snuggly Duckling Pub Thugs; and newcomer Cassandra, a tough-as-nails handmaiden, who becomes Rapunzel's confidant.

Sonnenburg is the executive producer and supervising director and Prigmore is co-executive producer and creative director. Jase Ricci (Teenage Mutant Ninja Turtles) is story editor. Celebrated artist Claire Keane (Frozen, Tangled), daughter of Disney Legend Glen Keane, who was animation supervisor on the feature film, consulted on development of the series. Emmy Award-winning Kevin Kliesch (Tangled Ever After) will serve as score composer.

Walt Disney Animation Studios' 50th animated feature Tangled introduced audiences worldwide to long-locked Rapunzel and charming bandit Flynn Rider in one of the most hilarious, hair-raising tales ever told. Debuting over Thanksgiving in 2010, Tangled opened with $68.7 million and went on to earn $200 million domestically and more than $593 million globally, becoming one of Walt Disney Animation Studios' biggest releases of all time. Featuring music by Alan Menken and Glenn Slater, the film was nominated for Golden Globe and Critics Choice awards for best animated film, as well as best song for “I See the Light,” which also won a Grammy Award and was nominated for an Academy Award. Rapunzel, Flynn and their friends Pascal and Maximus returned to the big screen for a royal wedding in the 2012 short film Tangled Ever After. Guests can experience the magic of Tangled at Disney Parks around the world, including dazzling encounters with Rapunzel herself at Magic Kingdom, Disneyland, and Hong Kong Disneyland. Rapunzel is not only one of the top-selling roleplay dresses at Disney Store but one of the most popular Disney Princess characters overall across licensed, Disney Store and Disney Publishing merchandise.