‘Sofia The First: The Curse of Princess Ivy’ features a special appearance by Rapunzel, voiced by Mandy Moore, who reprises her role from Disney's ‘Tangled.’ 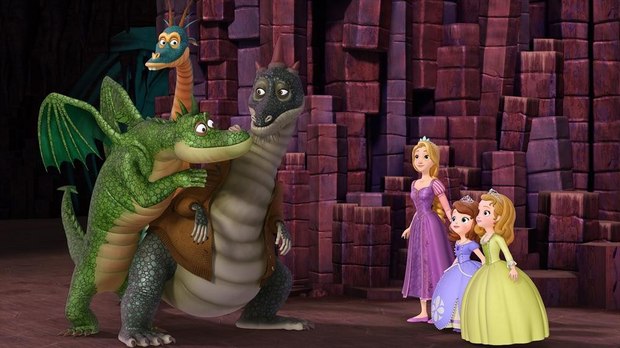 Amber discovers Sofia's amulet is magical and takes it without permission, inadvertently summoning an evil princess, Ivy, who's set on taking over Enchancia, in Sofia the First: The Curse of Princess Ivy, a primetime special of Disney Junior's Emmy-winning series, premiering Sunday, November 23 (7:00 p.m., ET/PT) on Disney Channel. The high-stakes adventure features a special appearance by Rapunzel, voiced by Mandy Moore, who reprises her role from Disney's Tangled. Film, television and Broadway actress Anna Camp guest stars as the nefarious Princess Ivy, along with her Pitch Perfect co-star John Michael Higgins as the self-appointed leader of an all-dragon a capella group, and Oliver Platt (The West Wing) as Enchancia's oldest-living dragon, Everburn.

A full-length preview of Sofia the First: The Curse of Princess Ivy and a new game based on the special will debut on WATCHDisneyJunior.com and the WATCH Disney Junior app for smartphones and tablets beginning Monday, November 10.

Disney Junior's Sofia the First is the all-time record holder for the top two cable TV telecasts for Kids 2-5. 2014 to date, it is TV's #1 series in Girls 2-5 and the #1 preschool series in Total Viewers and Women 18-49.

Disney Junior reflects the emotional connection generations of consumers have to Disney storytelling and Disney characters, both classic and contemporary. It invites mom and dad to join their child in the Disney experience of magical, musical and heartfelt stories and characters while incorporating specific learning and development themes designed for kids age 2-7. Disney Junior's series blend Disney's unparalleled storytelling and characters kids love deeply with learning, including early math, language skills, healthy eating and lifestyles, and social skills. In the U.S., Disney Junior is a daily programming block on Disney Channel and a 24-hour channel. There are 34 Disney Junior channels in 25 languages around the world.