Get ready for a fun-filled adventure with the Diamond Edition of 101 Dalmatians! Pongo, Perdita and their super-adorable puppies are in for thrills, hilarious spills and an epic action-packed adventure when they face off with Cruella De Vil, Disney’s most fabulously outrageous villainess. When Cruella dognaps all of the Dalmatian puppies in London, brave animal heroes launch a daring plan to save all puppies from Cruella’s clutches!

Based on the book “101 Dalmatians” by Dodie Smith, the film adaptation was directed by Wolfgang Reitherman, Hamilton S. Luske and Clyde Geronimi, and produced by Walt Disney himself. The voice cast includes Rod Taylor (Inglorious Bastards, The Birds) as Pongo, J. Pat O’Malley (The Jungle Book, Alice in Wonderland) as Jasper and Betty Lou Gerson (The Fly, Cats Don’t Dance) as the infamous Cruella de Vil.

Available for the first time on Digital HD, Blu-ray Combo Pack, Disney Movies Anywhere and On-Demand on February 10th, this special Diamond Edition release includes an all-new short, The Further Adventures of Thunderbolt, along with the 1961 version of “Walt Disney Presents The Best Doggoned Dog in the World,” “Lucky Dogs,” “DisneyView,” and “Dalmatians 101: Hosted by Cameron Boyce” (The Descendants), plus a selection of Classic Bonus Features. 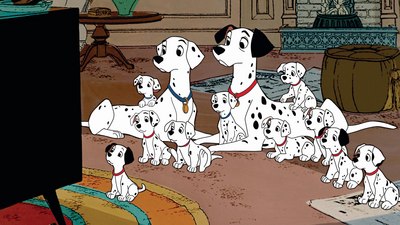