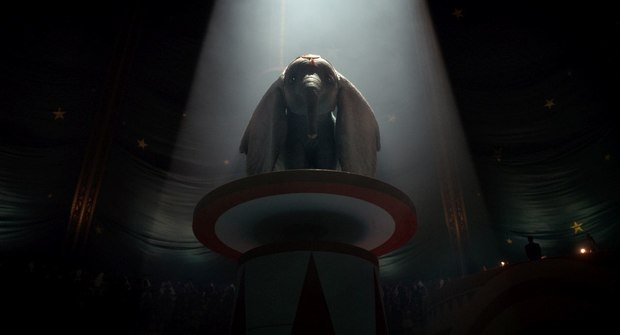 Dumbo soars to the crowd’s, and our, delight in the first official trailer for Tim Burton’s live-action remake of Walt Disney’s 1941 animation classic, set to arrive in U.S. theatres this coming March 29. Little information has been officially shared regarding Burton’s reimagining, though the trailer suggests he’s sticking close to the original story. The film’s digitally created characters, including Dumbo and his four-legged counterparts, along with the rest of the visual effects, are being overseen by production VFX supervisor Richard Stammers, a three-time Oscar nominee who performed similar duties on The Martian, (2015), X-Men: Days of Future Past (2014) and Promethius (2012).  VFX houses working on the film include MPC, Framestore, RISE, Rising Sun Pictures and Rodeo FX. Oscar-winner Rick Heinrichs (Star Wars: The Last Jedi, Dark Shadows) is the film’s production designer. Dumbo is being filmed entirely in England, both at Pinewood Studios and Cardington Studios.

In Burton’s updated story, Holt Farrier (Colin Farrell) is a former circus star who finds his life turned upside down when he returns from the war. Circus owner Max Medici (Danny DeVito) enlists Holt to care for a newborn elephant whose oversized ears make him a laughingstock in an already struggling circus. But when Holt’s children (Nico Parker and Finley Hobbins) discover that Dumbo can fly, persuasive entrepreneur V.A. Vandevere (Michael Keaton) and an aerial artist named Colette Marchant (Eva Green) swoop in to make the peculiar pachyderm a star.

Dumbo, which opened Oct. 23, 1941, won an Oscar for best scoring of a musical picture and was nominated for best original song for “Baby Mine.” Just last year, it was one of 25 films added to the Library of Congress’ National Film Registry. It is one of Walt Disney’s most heartfelt and emotional films – Burton, in movies like Big Fish (2003), has shown he’s more than capable of delivering dramatic excellence as well as quirkiness in his storytelling. Plus, any film starring Danny DeVito as an old-school carnival ringmaster defines “must see” cinema.