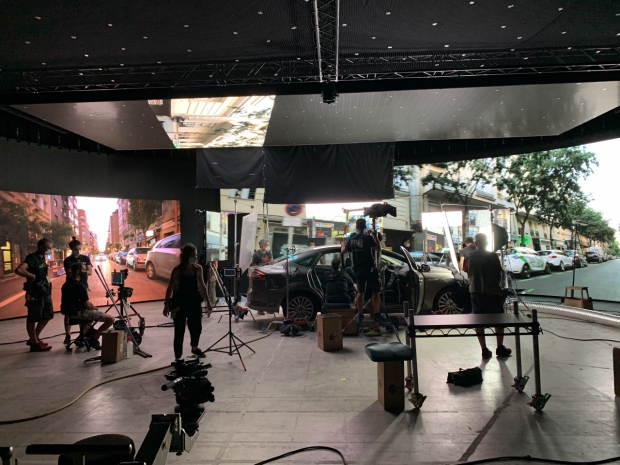 Virtual production for feature films and television is part of a new wave of adaptable, efficient, cost-efficient methods of reducing the need for complex location shooting without compromising quality. disguise platforms offer creatives and technologists production software with media server hardware to empower them to take advantage of new and virtual workflows.

La Fortuna is the story of the discovery of a Spanish frigate sunk by the British navy off Portugal in 1804 and the ensuing legal battle over the ownership of the treasure. Stanley Tucci heads a Spanish and American cast in the mini-series directed by Alejandro Amenabar and co-produced by Movistar+, AMC Studios, and MOD Pictures. “We were proud to shoot with Alejandro Amenbar on his first TV series and with Alex Catalan, one of the more demanding DPs in Spain,” commented MO&MO Film Services Virtual Production Supervisor David Monguet. “The project went perfectly, like all of our projects with disguise, with easy set-up and programming.”.

The process smoothed the creation of in-camera VFX for car scenes using plates shot in Chicago and scenes shot in Washington, D.C., showcasing the outside seen from the windows of the Spanish consulate. There were also sequences shot showcasing American TV reporting footage.

disguise Designer with the vx 4 servers helped achieve the desired cinematic results for many of these scenes. These included the color adjust layer, which was a must, and the blur layer, which helped DoP Catalan show the depth of field in some instances. PreComp, as a mapping type, was used in a blur layer, and color adjust was applied to manipulate all the layers simultaneously. In addition, the wrap tool helped adjust camera perspective in some scenes, while disguise’s ACES integration helped achieve color control for the VFX sequences.