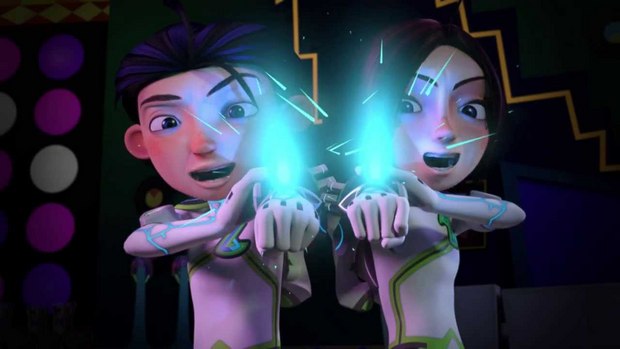 Silver Spring, MD -- Discovery Family has acquired the U.S. rights to the 26-episode series, Dream Defenders, from Tiny Island Productions. The series follows 14-year-old twins Zoey and Zane Mercer through their dual dimension adventures -- in both the “Realworld” of Meridian, and the fantastical universes of the “Dreamworld.” A premiere date for the series will be announced at a later date.

In the Realworld, Zoey and Zane have just moved to the American town of Meridian, where they uncover an exciting discovery in the attic of their new home -- supercomputer ZEUS, who has opened a portal to the Dreamworld, where humans to rest and recharge. With ZEUS as their trusty sidekick, Zoey and Zane now have access to this mysterious new realm -- but when something does not seem to be quite right in Meridian, the twins quickly realize the link to the evil happenings in Dreamworld. Villainess Icela and the other sinister inhabitants of Dreamworld are determined to turn dreams into nightmares, and suddenly, Zoey and Zane’s mission becomes clear. They are the Dream Defenders, two heroes who will secretly fight menacing monsters from a nightmare dimension to protect the citizens of Meridian.

In each 22-minute episode Zoey and Zane use high-tech gadgetry, teamwork and their problem solving skills to combat nightmares, and prevent Icela from finding the portal to the Realworld. Thwarting Icela’s sinister plans and zapping monsters -- not to mention, surviving high school and life in a new town! -- are all in a day’s work for Zoey and Zane. Dream Defenders will teach audiences to become stronger and braver, by facing your nightmares and conquering your fears.