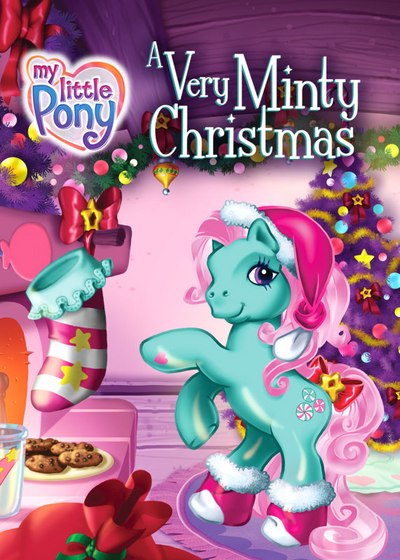 Silver Spring, MD -- Kids network Discovery Family, formerly operating as The Hub, is premiering My Little Pony: A Very Minty Christmas on December 13 at 7PM ET/6 PM CT, kicking off the channel’s holiday programming line-up.  The one-hour animated special features the whimsical and colorful My Little Pony characters in an engaging, heartfelt holiday adventure that will delight fans of all ages with its soon-to-be classic Christmas songs ("That's What I Like About Christmas" and "Nothing Says Christmas Like a Pair of Socks") while subtly imparting a message of the importance of honesty, friendship and team work.

My Little Pony: A Very Minty Christmas opens as the residents of Ponyville, each with its own unique name and interest, prepare their village for Christmas. The Christmas tree is decorated and its centerpiece, Here Come Christmas Candy Cane, is a glowing beacon which leads Santa Claus to PONYVILLE. Minty (voiced by Tabitha St. Germain), a rather clumsy pony, decides that Candy Cane is slightly crooked, but when she attempts to adjust it, it falls to the ground and shatters.

Fearing that she’s ruined Christmas for her friends, she tries to tell Pinkie Pie (voiced by Janyse Jaud) about the accident, but can't. So the ever positive Minty decides that she must take matters into her own hooves to remedy the situation. First, she tries to play Santa Claus, delivering presents to the other ponies, but this doesn't work. Believing her only choice is to personally guide Santa to PONYVILLE, Minty takes one of the Ponyville hot-air balloons and heads for the North Pole, but will she make it and save Christmas for her friends?

In addition to My Little Pony: A Very Minty Christmas, Discovery Family’s special holiday programming includes the premieres of Littlest Pet Shop (Season 3) “Winter Wonder” on December 13 at 12:30 p.m. and Transformers Rescue Bots (Season 2) “The Riders of Winter” on December 13 at 1 p.m.