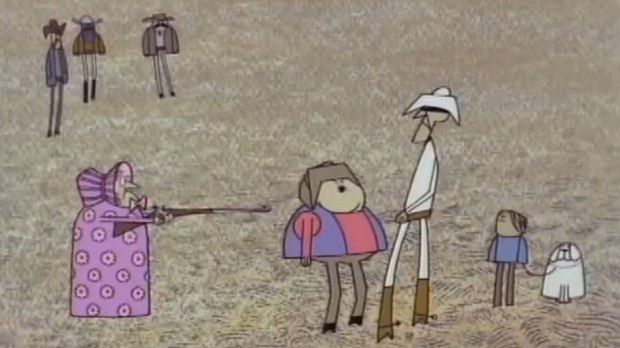 ASIFA San Francisco president Karl Cohen has informed AWN that animation director Jeff Hale died in late February at the age of 92.  With a career in animation spanning more than 50 years, Hale’s work ranged from his controversial Lenny Bruce short, Thank You Mask Man (1969), to his Emmy-winning directing on Jim Henson’s Muppet Babies (1985-86).

After moving to Canada from his native England in 1956, Hale joined the National Film Board of Canada in 1959, working on a number of projects including segments of shorts compiled for Canadian TV, first in Hors-D'Oeuvre (1959-60) and then in Pot-pourri (1962). Along with Norman McLaren, Grant Munro and Gerald Potterton, Hale animated segments for a 1963 NFB  Christmas short, Christmas Cracker, that went on to receive an Academy Award nomination. Hale and Derek Lamb collaborated on the The Great Toy Robbery (1964) before he left to join Cameron Guess and Associates in San Francisco, soon to be joined by Lamb and animator Barrie Nelson. The studio produced the films The Well (1965) and The Shepherd (1967). According to Hale, Guess invited him and Lamb to a Christmas Eve drink, shortly before The Shepherd was finished. After they all enjoyed a drink together, Guess promptly fired them both. Hale claimed Guess wanted full credit for the film, which eventually was nominated for an Oscar in 1970.

The Great Toy Robbery by Jeff Hale, National Film Board of Canada

Hale then became partners with John Magnuson and Walt Kramer at Imagination Inc., and began providing a large amount of animation for Sesame Street. Magnuson was close friends with comic Lenny Bruce, and working from live Bruce recordings from Kramer’s extensive library, directed the highly controversial Thank You Mask Man. Magnuson would continually court trouble with the film. After submitting the film to the Motion Picture Academy, he later found out from Bill Meléndez, chairman of the animation nomination committee, that the film was never screened for consideration. Magnuson said he believed an Academy member hated Bruce so much he hid the entry; Hale’s version was that the projectionist decided on his own not to show the film as an act of censorship.

Along with his wife Margaret, Geraldine Clarke and Prescott Wright, Hale founded The San Francisco Animation Association in 1973, which eventually became ASIFA San Francisco once ASIFA’s European board accepted their application for chapter status in 1975. When Imagination Inc. closed in 1979, Hale helped setup and run the animation department of Mill Valley Animation. From 1979-1980, he worked on a number of  The Flintstones episodes.

He left Mill Valley to team up with old NFB friend Gerald Potterton to animate the “B-17” segment of the animated feature Heavy Metal (1981). He went back to episodic TV work during the 1980s, including freelance animating on shows like The Charlie Brown and Snoopy Show (1983), the first season of The Transformers (1985), and his award winning work on Muppet Babies. Hale retired to Talent, Oregon in the late 80s, though he continued to paint and draw until his death.