Coming Friday, July 22, the second season of Boat Rocker’s animated preschool series follows the Cassidy family wrangling a lively herd of dinosaurs which are also their best friends; all-new episodes kick off tomorrow and will follow later this fall on Disney+. 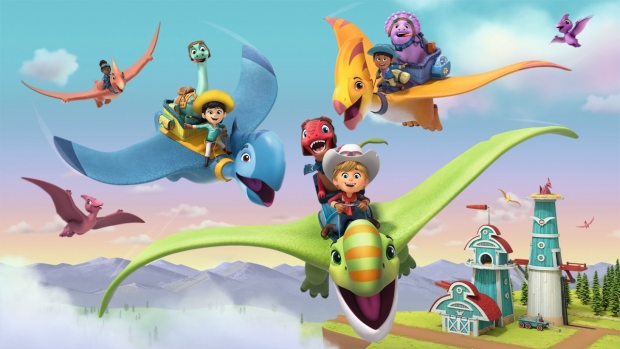 Season 2 of the popular animated preschool series Dino Ranch returns to Disney Junior in the U.S. on Friday, July 22. The show follows the Cassidy Family on their ranch as they round up, ride, and care for a lively herd of racing, roaring dinosaurs. Created by Matthew Fernandes and produced by Industrial Brothers and Boat Rocker, the animated comedy features mischievous fun that highlights the value of hard work, teamwork, and commitment.

Along with reuniting young Dino Ranchers with their favorite characters, the new season introduces new characters, including daredevil Tara Dacktle, her pterosaur pal Wilbur and her dad, Captain Zachry Dacktle, the uber-enthusiastic pioneer of pterosaur flying. Based at the Dinoport, a search and rescue outpost that doubles as the local post office, they run the Flyer and Rescue Squad that helps deliver supplies and important messages across the range and looks out for wild dinosaurs in need of help.

“Following the tremendous response, we received from season one of Dino Ranch, we have expanded and super-sized the Dino Ranch universe with lots of new elements,” said Jon Rutherford, president, Boat Rocker, Kids & Family and Rights. “This second season introduces our young fans to more dino-driven fun with brilliant new dinosaurs, incredible vehicles, action-packed adventures, and amazing new locations. We know that our fans loved seeing flying dinos on screen in Season 1, so we have brought many more to Season 2.”

The news season will launch Dino-SOAR!, a tentpole special featuring the high-flying adventures of young ranchers as they team up with new flying partners, dimorphodon Thunderbolt, thalassodromeus Cloud, and tapejara Twister. Together at the Dinoport, they learn to fly dino rescue missions so they can soar into new adventures.

Dino Ranch’s blend of two preschool themes – dinosaurs and ranchers – alongside a tight-knit adoptive family and engaging storytelling has been popular since its U.S. launch on Disney Junior in January 2021. With its global popularity and strong international sales, it is now available in 170 countries with 45 U.S. licensee partners in toys, apparel, publishing, costumes, footwear, and bedding. Boat Rocker manages the franchise's global content distribution and consumer products program.

Follow the Cassidy family on Instagram and YouTube.com/DinoRanch for sneak peeks, nursery rhyme music videos, and additional content. The series is supported by a full line of merchandise available this summer in stores across the US.