Stop motion animated TV special created by Agnès Lecreux and Jean-François Le Corre, ‘Dimitri in Ubuyu,’ to screen in competition at Annecy 2015; new characters created for season two to be unveiled at MIFA. 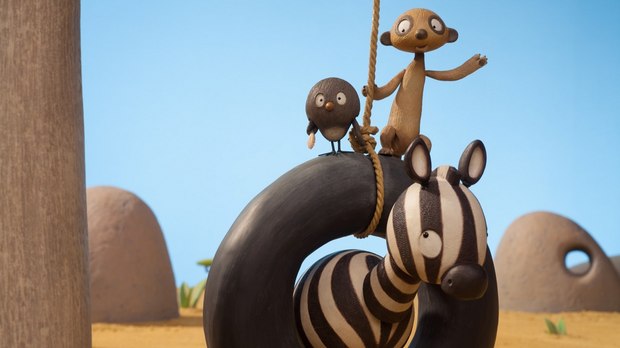 The stop motion animated series created by Agnès Lecreux will be twice under the spotlights at Annecy 2015. The TV special Dimitri in Ubuyu will be in competition Films for TV at Annecy's Festival and Vivement Lundi! will unveil new characters for a second season at the MIFA marketplace.

Dimitri is a stop motion program for 3 to 6 year old children produced by the French studio Vivement Lundi! in coproduction with Beast Animation (Belgium) and Nadasdy Film (Switzerland). A little migratory bird lands in Africa during a storm and discovers there an unknown world where he will make new friends.

The show was created by first-time director Agnès Lecreux. She designed Dimitri and the main characters of the series at art school and her 3D universe has been a love at first sight for Jean-François Le Corre and Mathieu Courtois, both producers at Vivement Lundi!

Pitched at Cartoon Forum 2011, Dimitri has first appeared on the French channel France 5 in the pre-school slot Zouzous during spring 2014. The program includes now a 26-minute TV special, Dimitri in Ubuyu, a five-minute, 26-episode animated series, and an educational web-series called Tell me Dimitri.

Over the past year, the small bird did not only land in Africa. Internationally distributed by France Télévision Distribution, Dimitri has been one of the most watched programs among buyers at MIPCOM Junior 2014.

Dimitri started his festival career in September and has already won two prestigious prizes: Best Animation Series for Children at the Ottawa International Animation Festival (OIAF) 2014 and the Audience award at the Brussels Anima Festival in February. Web series Tell me Dimitri was a finalist at the MEDEA Awards and has received the Animation Award at the Africa Web Festival of Abidjan 2014.

Agnès Lecreux and Vivement Lundi! are currently working on the development of a second season. The original concept of a series that allows discovering Africa without showing savannah animals in anthropomorphic situations will remain. Some new characters will join the plain of Ubuyu and live new adventures with Dimitri and his friends. At Annecy's MIFA animation marketplace, Vivement Lundi! will unveil a new teaser introducing Tamaa, a baby guenon, and Anansi, an African spider who lives in a mysterious house. Vivement Lundi! hopes to launch this second season in 2016.