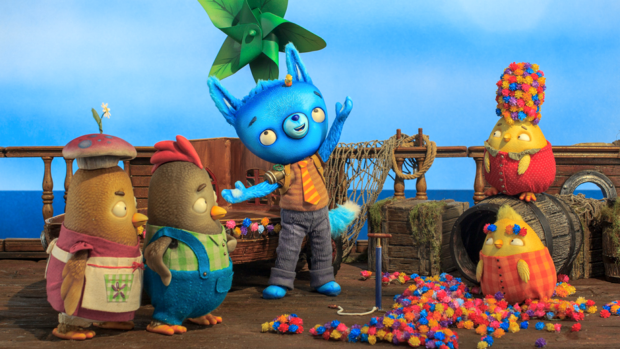 Los Angeles, CA -- The National Academy of Television Arts & Sciences (NATAS) has announced the winners of the 42nd Annual Daytime Creative Arts Emmy Awards at a gala held for over 1,200 attendees at the Universal Hilton, in Los Angeles, CA.

The Daytime Creative Arts Emmy Awards recognize outstanding achievement in all fields of daytime television production and are presented to individuals and programs broadcast from 2:00 a.m. to 6:00 p.m. during the 2014 calendar year.

“We are thrilled with the amazing recognition the Television Academy has given Tumble Leaf and extremely grateful!” commented series creators Kelli Bixler and Drew Hodges. “It was our intent to create something beautiful and worthy of every four-year-old, because we remember when we were four and watching what we watched inspired us and we should all be so inspired.  To be children again -- curious, thrilled, invested- isn’t that’s what it’s all about?!”

“We are thrilled the Television Academy has recognized Tumble Leaf and are proud to be working with the Bix Pix team,” said Amazon Studios head of kids programming Tara Sorensen. “It’s an innovative series in the kids space that combines stunning visuals with a unique curriculum and a call for kids and families to go outside and play to learn.”

“I am truly in awe of the collective talent and tenacity that thrives within Moonbot Studios,” Trish Farnsworth-Smith, head of production at Moonbot, said about the wins. “We are thankful for the opportunity to work with our incredible collaborators at Dolby and CAA.”

Other notable wins for PBS included The Fred Rogers Company’s Odd Squad (co-produced with Sinking Ship) with two Emmys, and Peg + Cat (co-produced with 9 Story Media Group) with the award for outstanding writing in a preschool animated program.

Discovery Family Channel chalked up three wins, all by R.L. Stine’s The Haunting Hour: The Series, and Disney Junior received two awards, including outstanding music direction and composition for Sofia the First.

Here are some of the key children’s categories wins:

Visit emmyonline.com for a full list of the winners.