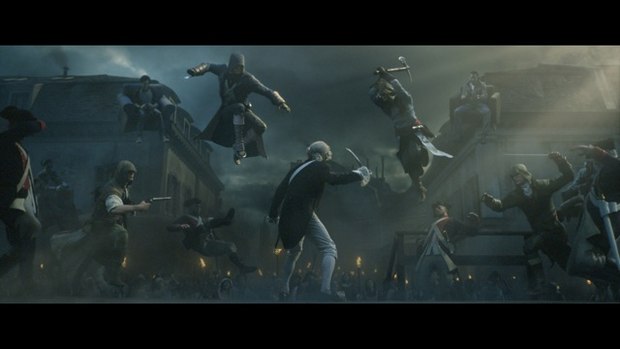 “Mistress’ concept was equally artful and cinematic, which really inspired us to create something unique in the commercial-making sphere using the same caliber of VFX we apply to the feature film world,” remarks Neil Huxley.

“Make History” was shot over two days with four units at a Los Angeles sound stage. Cinematographer Ross Emery (The Wolverine) lensed all of the live-action, including 25 extras in full period costumes before Digital Domain transformed them into hundreds of unique CG characters. Digital Domain created the realistic movement of the gamers by shooting plates against green screen and deploying stunt men in green suits -- “green ninjas” -- who lifted the actors in their chairs and moved them realistically.

“It was an unbelievably successful and efficient shoot, which is a tribute to our crew across the board,” says Huxley. “Directors usually step away at this point, but the benefit of Digital Domain and Mothership is: I get to see everything through to the end with VFX and post.”

Huxley and his team worked closely with Mistress to incorporate the finer details of the game and its storyline, such as signature character moves, weapons, and gameplay features. “Visually capturing all of the story beats that Mistress wanted us to hit on in essentially 38 seconds was a challenge, but we pulled it off,” says Huxley. “We needed a style to seamlessly transition between all these different moments, which we dialed in by varying the editorial pacing.”

For the trailer’s culminating fight scene, which dramatically depicts Arno, his Brotherhood of the Assassin’s brethren and four gamers descending upon Robespierre as executioner, Digital Domain built an authentic, life-sized guillotine for the scene. The template for the climactic shot was a sketch that Mistress provided. Rembrandt-like lighting of the scene's cityscape was based on Croshaw’s own HDR reference photos of Notre Dame and Emery’s lighting on green screen.

“We composed and framed each CG shot like a classical painting that could stand on its own,” concludes Huxley. “The big question going in was, ‘how are we going to best blend the CG and the live-action?' The period of the game inspired the resulting aesthetic from the outset. Atmospherics and smoke were important blending elements, and the color-grade beautifully emulates the period, giving the film a neoclassical feel. It was a conscious effort by all involved to provide a style that is faithful to the brand.”