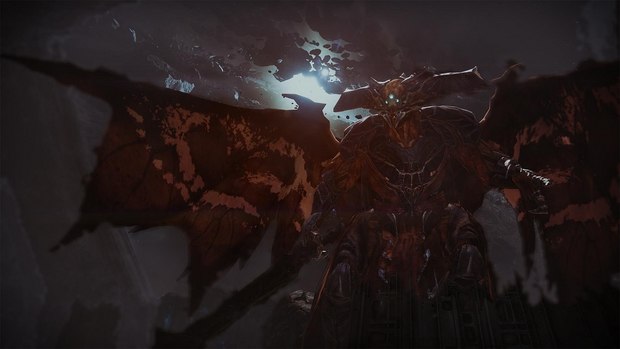 Activision, Bungie, 72andSunny, Digital Domain, RESET and Hollywood director Joseph Kosinski partnered once again to create the Blockbuster-worthy live-action trailer to launch Destiny: The Taken King, the first major expansion to the Destiny universe. The action-packed Evil’s Most Wanted promo made its broadcast debut on September 10 during the NFL season opener between the New England Patriots and Pittsburgh Steelers.

The new spot is hyper-realistic and incredibly detailed, pushing the boundaries of gaming possibility. The trailer depicts a Fireteam of Guardians venturing to take on the vengeful King Oryx and his army. Dark humor and dread-tinged tension explode over a jaw-dropping action sequence set to the raucous Led Zeppelin anthem “Black Dog” that culminates in the promise of even more epic adventure to come.

Kosinski’s concept for last year’s debut spot was clear, to create a live-action version of the Destiny game. In the original spot, the Fireteam is shown battling alien invaders across stunning exotic environments pulled from real life, with the shoot taking place in Mexico, Arizona and Utah.

The Taken King trailer required a slightly different approach, with the head-to-head battle between the Fireteam and Oryx’s army taking place on a spaceship on the rings of Saturn.  “We ended up doing a lot more digitally this year, by nature of where the action occurs, but we wanted to ground it in the same visual language we used previously,” explains Barba.

Filming took place on a sound stage in Culver City. “The production designer created a beautiful floor for us, which allowed us to plan the shots and sequences,” Barba  remarks. “Then we did motion capture to pick up the movements and actions, using the CG camera as if it were live action.”

Each visual element, from the color palette to the movement of ash particles falling through the atmosphere, was meticulously planned to create a cinematic representation to exceed the expectations of gamer fans when Destiny: The Taken King hits store shelves worldwide on September 15th for PlayStation®4, PlayStation®3, Xbox One and Xbox 360.Source: Digital Domain