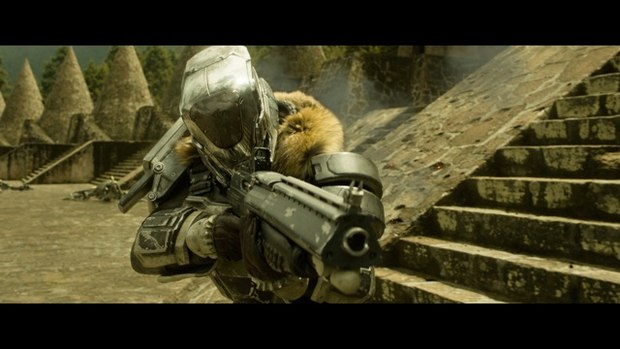 Los Angeles, CA -- Visual effects powerhouse Digital Domain collaborated with acclaimed feature filmmaker Joseph Kosinski and agency 72andSunny and Bungie to create the trailer for Destiny, the popular first-person action game published by Activision. Featuring a stunning blend of cinematic live-action and visual effects, the trailer depicts a Fireteam road-trip across the solar system, exploring new worlds and battling enemies to realize their “Destiny to Become Legend.” More akin to a blockbuster short than a trailer, the two-minute film packs plenty of pulse-pounding action, from Mars to Venus to the moon and back.

With a vision to create a visually cinematic narrative about the game, director Kosinski brought on Digital Domain's Eric Barba as VFX Supervisor. The two longtime collaborators had previously worked on myriad high-profile projects, including recent feature films TRON: Legacy and Oblivion.

The production goal was to capture as much of the action in-camera as possible, scouting exotic locations that could be augmented to represent Destiny's mythic sci-fi setting and atmosphere. With four shoot-days during a travel-intensive production that wrapped in just two weeks, Kosinski and Barba's teams shot at international locations such as Tampico, Mexico, which doubled for Venus, and Utah, which stood in for the moon.

“Beyond physical locations, we wanted to use the physicality of the actors in their costumes to really carry the performances and use of stunt doubles,” expounds Barba.

Bringing the game world to life required seamless integration of photo-real CG and the live-action footage. Working closely with Bungie, Digital Domain augmented everything from characters to environmental elements such as fire and planetary landscapes. To accomplish this, they built traditional set extensions. Starting from plates that DP Claudio Miranda shot, they tracked the plates, designed the shots, and then incorporated the in-game assets.

“We used lot of the same techniques from our VFX pipeline for features,” says Barba. “Our augmenting team enhanced the models and textures and collaborated with Bungie, while our rigging, lighting and compositing team made sure they matched elements in the live-action shots.”

Referenced by one of the trailer's characters as “something classical,” Led Zeppelin’s “Immigrant Song” notably soundtracks the trailer.

“72andSunny had a strong idea of what music they wanted going in,” says Barba. “Anytime you get to create a piece of cinema to Led Zeppelin, you already got a strong foundation for a visual piece like this. You just have to make sure the picture lives up to that classic track.”

Because commercial productions demand drastically faster turnarounds than features, Barba is especially proud of the VFX and production value that he and his team achieved for Destiny. “In the commercial world, you have to move much, much faster, so you're making quick decisions and working very collaboratively right from the get-go – internally and with the client,” he explains. “Not only did 72andSunny, Activision, Bungie and Joseph give us everything we needed to create and execute at a high level, our team worked efficiently between both our LA and Vancouver offices. Of course, it's the kind of project Digital Domain has been doing for years, so, fortunately, there were no hiccups.”

Between reuniting with longtime collaborators Kosinski​​ and Miranda, the project was like stepping right back onto the Oblivion set as most of the same filmmakers and crew were involved, Barba concludes: “Joe and I have always had a way of working together. Both he and Miranda – my brother from another mother – are true collaborators.”