Did ‘South Park’ Troll or Tip a Sly Nod of Support to ‘The Simpsons’?

New episode, ‘The Problem with a Poo,’ ends with a #cancelthesimpsons hashtag as Mr. Hankey is banished from town for insensitive tweets, landing him in Springfield alongside the controversial Apu Nahasapeemapetilon. 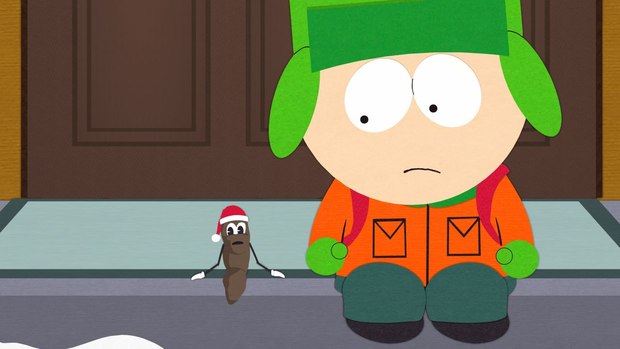 Online opinions are mixed regarding whether last night’s episode of South Park was a direct face slap, or a wink-wink back slap of support for The Simpsons, the Fox animated series recently embroiled in controversy over perceived cries of cultural appropriation over recurring character, Apu Nahasapeemapetilon.

In “The Problem with a Poo,” Mr. Hankey, after a series of nasty late-night tweets hurled at the South Park town, kids, citizens, and mayor, among others, is fired as director of the city’s Christmas pageant and literally forced to leave town.

When no one stands up in support of Mr. Hankey’s attempt to save his job, Kyle steps up in what proves to be a futile effort where he literally gets shit on. Poking fun at both Roseanne Barr’s firing from her resurrected Roseanne TV series, and the just concluded Brett Kavanaugh SCOTUS hearings, Mr. Hankey blames one nasty tweet after another on the Ambien he’s been taking for insomnia, ultimately claiming his foul Twitter screeds were just bad attempts at telling Christmas jokes. He even attempts to defend his nasty digital rants at a special hearing, eventually storming off in an obscenity-laced tirade. After yet another expletive-laden outburst, a fistfight with lone-supporter Kyle that destroys an outdoor Christmas celebration stage and sends the gathered crowd fleeing in disgust, Mr. Hankey’s time in South Park comes to an end.

As the gathered crowd stands in silence, Mr. Hankey boards a “Poober” (in a nice, nasty jab at Lyft and Uber). Kyle solemnly asks, “Where will he go?” Stan’s dad Randy stoically replies, “He’ll have to find a place that accepts racist awful beings like him…there are places out there that don’t care about bigotry and hate.”

Right on cue, Mr. Hankey rides out of town…and right into the town center of Springfield, where he’s greeted by a host of Simpsons characters, including Homer, Bart and Apu, who in a heavily accented Indian voice, exclaims, “Welcome my friend. Please rest your weary feet and make yourself at home.” Then the screen fills with #cancelthesimpsons. In case you were otherwise occupied, The Simpsons most recent controversy centered around the media fire originally lit by comedian Hari Kondabolu’s 2017 documentary, The Problem with Apu. Kondabolu, an un-abashed Simpsons fan, claims that the character of Apu, a college-educated Indian immigrant who owns the town’s Kwik-E-Mart and is voiced with an outrageously exaggerated accent by Greek-American actor Hank Azaria, is not only inherently racist and insulting, but could easily be changed to avoid further affront. The situation was further inflamed by executive producer Al Jean’s perceived indifference and tone-deaf Twitter responses, along with the promised response episode in April, alluded to by show creator Matt Groening that after airing, merely further outraged critics with its seemingly middle-finger message.

Regarding last night’s apparent South Park diss, Jean told The Hollywood Reporter, the episode’s ending, including hashtag, was meant in fun. “It's actually in favor of us saying people are too critical. Hari Kondabolu [one of the most outspoken critics of the Apu character] tweeted he thought they agreed with him but pulled the comments showing he was wrong. All season the show has had a #cancelsouthpark hashtag so my response (which I tweeted) is: #pleasedontcancelsouthpark.”

Considering Comedy Central spent months promoting the new season of South Park with an extensive tongue-in-cheek advertising campaign, complete with billboards, proclaiming #cancelsouthpark, Jean’s sentiment seems the more accurate assessment. Obviously, the very essence of South Park’s relevance and humor is taking anyone and anything to task at any time, without deference to supposed “sacred cows” or PC sentiments. Or other shows. But, as subtle or heavy-handed as South Park’s humor and deeper meaning can be, such a blatant swipe at The Simpsons would seem curious, disingenuous and even hypocritical.

For those of you not old enough to remember, The Simpsons spent many of its earliest years in the cross-hairs of countless politicians and organizations convinced the show was ample evidence of the downfall of Western civilization. The extent of that controversy, for an upstart animated prime time series on an upstart new TV network no less, was and remains unequaled. Which only fueled its popularity.

Maybe that potential hypocrisy is part of the point. After all, The Simpsons is a show whose ground-breaking, unflinchingly un-PC and often terribly unpopular attacks on society’s foibles and cultural norms going back 30 years paved the way for every piece of adult animation, especially South Park, that followed. Would a South Park diss be the pot calling the kettle black? Let’s not forget, central to the episode’s theme is Mr. Hankey, a piece of shit sporting a Santa Claus hat. And like he dejectedly says to Kyle, “We all do something shitty sometimes.”

Let’s also not also forget, in our quest to debate who threw shade on whom, that perhaps the episode’s most painfully funny, thought-provoking and missed-if-you-blinked message, came in the very opening scenes, having nothing to do with any of the above. Riffing once again on the “who cares about another school shooting” theme of the season premiere, we open with a shot of the school, American flag rippling in the wind, punctuated by a long series of screams and gunshots, followed by sirens and police cars. The, we slowly pan to City Hall, where inside, a deeply concerned mayor lectures the council about how the town is looking for answers and they have to face some hard truths…they need to cut the Christmas pageant’s budget in half, and Mr. Hankey will not be pleased. And we all know, when it comes to school shootings or a Christmas poo, you can’t fight City Hall.