Did ‘The Simpsons’ Once Again Predict the Future?

The iconic series, known for its uncanny prescience, showed Lisa Simpson succeeding Donald Trump as President back in a 2000 episode… wearing an outfit eerily similar to VP Kamala Harris’ inauguration suit and pearls. 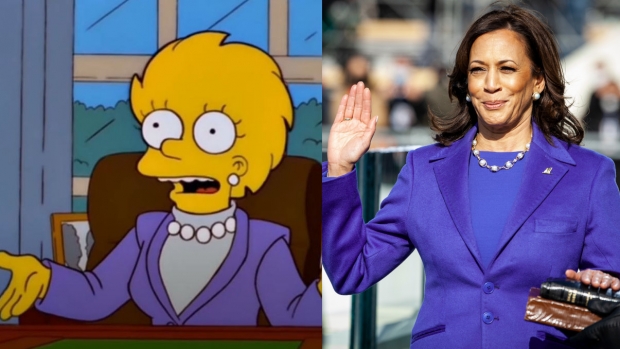 It’s a well-known fact that over the years, the writers of Fox’s The Simpsons have displayed an uncanny prescience numerous times, foreshadowing well-distant future events with gags and storylines within the series. One of the most famous was Episode 17 of Season 11, "Bart to the Future," way back in 2000, with the show’s prediction of Donald Trump as President of the US.

Well, as of this past Wednesday’s inauguration of President Joe Biden and Vice President Kamala Harris, that episode has proven even more eerie with its depiction of a President Lisa Simpson, taking over for Trump, wearing a suit and pearl necklace remarkably similar to the outfit worn by Harris as she was sworn in as America’s first female VP.

And a reaction from Marge we did get, with her usual subtle, ironic sarcasm, in a video clip released by Fox: “As an ordinary suburban housewife, I’m starting to feel a little disrespected.”

“I teach my children not to name call, Jenna…,” Marge shares, before adding under her breath, “I was going to say I’m pissed off, but I’m afraid they’d bleep it.” At the time, Ellis was also pushing the racist, wholly untrue Kamala Harris birther theory by reposting a tweet from conservative group Judicial Watch president Tom Fitton asking if Harris is “ineligible to be Vice President under the U.S. Constitution's 'Citizenship Clause.'" And the hits Ms. Ellis just keep coming.

In another instance of “Simpsons Did It” detective work, Yahoo News shared that fans of the series also claimed Tom Hanks’s post-inauguration address had also been predicted by the show. Hanks made a cameo in the 2007 The Simpsons Movie as part of a propaganda film framing the destruction of Springfield as creation of “the new Grand Canyon,” with the popular actor noting, “The US government has lost its credibility, so it's borrowing some of mine.”

In the movie, however, he didn’t appear to be freezing his Wilson off like he did standing in front of the Lincoln Memorial.

To celebrate the show’s 30th Anniversary in 2018, The Hollywood Reporter published a list of 30 times The Simpsons successfully predicted the future. Prognosticators or not, the writers behind the series have proven they continue to see deep into the future of biting, humorous satire, and as far as we know, will continue to consult that crystal ball for many years to come.