Cinedigm announces plans to release an English-language version of Aachi & Ssipak on DVD, Blu-ray, and digital platforms on March 11th with an early digital release of the first chapters on YouTube starting February 11th. 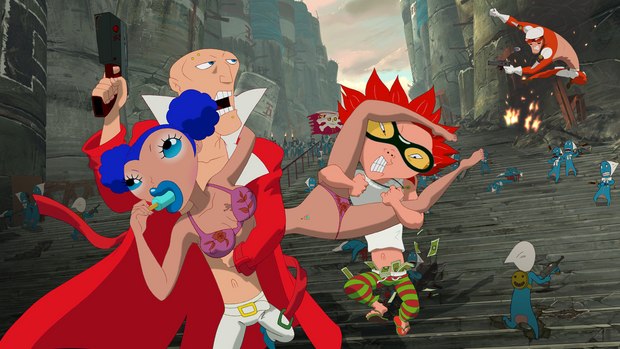 Cinedigm is releasing Aachi & Ssipak on DVD, Blu-ray, and digital platforms on March 11th with an early digital release of the first chapters on YouTube starting February 11th.

With support from the wildly popular YouTube channel, Mondo Media, comes Aachi & Ssipak, an original and bizarre animated comedy from Mondo Media the distributors of mega-hits Happy Tree Friends and Dick Figures The Movie. Originally created in Korea, this all-new English language version was re-written and re-voiced by Ed Skudder and Zack Keller, the creators of Dick Figures.

Aachi & Ssipak are two likable street hoodlums who scrape by stealing and selling "Juicybars," highly addictive blue popsicles distributed by the government in exchange for human excrement, the only usable fuel in Shibal, a dystopian, futuristic, post-apocalyptic city. Aachi and Ssipak hook up with "Beautiful," a blue-haired, wannabe-actress with a lucrative knack for making the Juicybars pile up. Aachi, the entrepreneur, exploits her special talent and Ssipak, the romantic, falls in love with her. Rich in Juicybars, the threesome go on a rock star tearup that makes them a target. They are pursued relentlessly by both the Diaper Gang, an army of violent blue mutants led by the Diaper King, and the police.

Aachi & Ssipak is a crazy, high octane story driven by a contemporary dubstep sound track with some of the most mind blowing action scenes ever to be animated. The original score for the film was produced by the studio Mad Decent, the label responsible for the Harlem Shake viral craze.

Directed by Jo Beom-jin, the film will be broadcast on Mondo Media's YouTube channel as a “Streamium” release, a method pioneered by Mondo Media wherein the feature length film is distributed in weekly ad-supported chapters on YouTube while simultaneously being released in its entirety on Google Play and other paid/rental digital platforms.

Check out the trailer and Episode 1, below: